The Lincoln Meade Neighbourhood Watch deserves a pat on the back after a courageous effort to apprehend thieves who stole various items from a house in the area at the weekend. 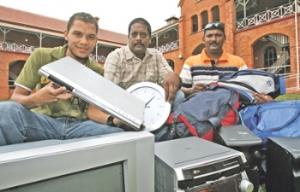 The Lincoln Meade Neighbourhood Watch deserves a pat on the back after a courageous effort to apprehend thieves who stole various items from a house in the area at the weekend.

The stolen goods, including bags of clothing, a DVD player, a TV set and a hi-fi system, were returned to the owner at the Alexandra Road Police Station yesterday.

Lincoln Meade Neighbourhood Watch secretary Wayne Janneker said four teams were on duty in the early hours of Saturday morning when one of the teams spotted a group of men walking up Grimthorpe Avenue from the low-level bridge.

The teams were alerted by the noise the men were making and upon closer inspection, they saw that they were possibly burglars carrying stolen items.

The men seemed to be drunk, possibly from drinking alcohol stolen from the house they had burgled.

Janneker said that when the team confronted the three men, they dropped all the items they were carrying and fled up the road.

The men then ran on to a connecting road, Dunsby Avenue, and jumped over a fence and into adjacent bush.

However, team member Ian Roberts managed to apprehend one man, tying his hands and feet with cable ties and then searching him.

The police and dog units were then called in to assist in an attempt to find the other two men, but to no avail, despite an extensive search.

The arrested man was handed over to the Alexandra Road police, as was a vanload of household items, including a Swiss army knife that was found on the suspect.

Lincoln Meade residents who wish to join the Neighbourhood Watch can contact Ian Roberts on 082 530 9896 or e-mail lincolnmeade@ratesa.co.za.