The Tatham Art Gallery’s 2008 programme gets going on Sunday, January 27 with the opening of a New Acquisitions exhibition 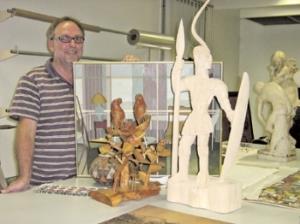 THE Tatham Art Gallery’s 2008 programme gets going on Sunday, January 27 with the opening of a New Acquisitions exhibition, showing work recently bought by or donated to the gallery, as well as some pieces that have been in the Tatham for many years, but for various reasons had never gone through the accessioning process to make them part of the collection.

“Every now and again there’s a gap in the programme and it seems a good idea to display some of the new work,” says Tatham director Brendan Bell. “In the past, we’ve just put it up and labelled it, but this time we want to contextualise it a bit. It’s important for people to realise that it is not simply a case of us seeing something and falling in love with it. There has to be a reason.”

Perhaps the work fits into the collection as part of the historical process of artmaking, or is the work of an artist from a period of his or her working life that is not represented in the gallery. “Some pieces may be part of a thematic issue — like traditional Zulu woodcarving being transformed into a contemporary art form,” Bell says.

To illustrate the point, he shows three pieces bought at last year’s Echo Bazaar. One is Betheul Mkhize’s jacaranda wood sculpture of King Shaka, based on James King’s drawing; another is Sofi Ntshalintshali’s “African Goshawk” carving, showing a tree with perching birds. Bell describes both of these as moving beyond the traditional carving of functional craft objects.

The third piece is Shokwakhe Mngadi’s 2010 stadium painting, complete with electric lights. “It makes a huge statement,” says Bell. “We really wanted to get that before we are all inundated with horrible World Cup memorabilia.”

Other recent acquisitions came from the exhibition organised by Terry Broll in Hilton in September. They include Inside-Outside painted in 1979 by Cathy Fowler (better known locally as Cathy Cannon). Bell was particularly happy to have it as Fowler was a student of Jane Heath’s.

“Over the years, we have collected a lot of work by Jane’s students, some of which are hanging in the gallery. She had an incredible influence on a whole generation of artists who studied here,” explains Bell.

Another work from the same source is Shan Jacob’s powerful painting, Shembe Stones.

One of the most poignant purchases is a beadwork isigege — the skirt worn by an unmarried woman. Made by local crafter Eunice Cele whom Bell describes as the finest traditional beadworker currently working in the area, it has an unusual pattern of houses and was made by Cele while she was nursing her dying daughter.

“And then, there are the others,” says Bell. These are pieces that have never been accessioned but have been around the gallery or the city hall — some for around 100 years. Where they came from is a mystery.

One is a marble shepherdess, with the signature “E. Fischier” carved onto the base. Bell has been unable to find any trace of a sculptor of that name nor can he discover when the piece came to the gallery. He thought the best thing to do might have been to sell her and use the funds for other purchases, but the committee felt the work represented an important part of the whole ambience of late 19th and early 20th century life. And so she stays.

Other mysteries are the subjects of two large portraits. One is of a man in military uniform, and Mark Coghlan of Museum Service is currently researching the medals he is wearing. It might be Sir Duncan McKenzie, but no-one knows for sure at this stage. And the other is painted by Tennyson Cole, a well-known English portrait painter, and dated 1914.

“We’ll put him on the exhibition — who knows, someone may know who he was. The painting was in the city hall — perhaps he’s a former mayor,” says Bell.

There are also extraordinary Ethiopian paintings, which were in a basement drawer, but with no record of how they came to be there. One is on fabric, one on parchment, another on skin. One has Coptic script around the edges, and shows scenes of hangings and torture.

“We’ll certainly exhibit some of them,” says Bell, who is also confident that he will eventually get to the bottom of where they came from and what they really are.

And now the public can see them, and many other pieces, for the first time.