THE action thriller, Unstoppable, which opens in Pietermaritzburg today, was inspired by actual events.... 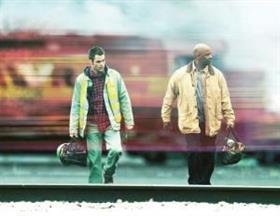 THE action thriller, Unstoppable, which opens in Pietermaritzburg today, was inspired by actual events.

It tells the tale of a veteran train engineer (Washington) and a young conductor (Pine) who have to race the clock to stop an unmanned runaway train — effectively a missile the size of a skyscraper — and prevent disaster in a heavily populated area.

The thriller is one of three new films in the city this weekend — the other two are the British comedy, It’s a Wonderful Afterlife and the horror, The Crazies.

It’s a Wonderful Afterlife tells the story of an Indian mother, Mrs Sethi, whose obsession with marrying off her daughter, Roopi, (Goldy Notay) leads her into the realm of serial murder using her culinary skills.

Mrs Sethi doesn’t feel guilty about her actions until the spirits of her victims come back to haunt her — it seems they can’t be reincarnated until their murderer dies. So Mrs Sethi vows to make the spirits wait until her daughter is safely married off before she joins them in the afterlife.

In The Crazies, an idyllic town in America turns into hell when its normal law-abiding citizens are transformed into blood-thirsty killers. It’s up to Sheriff David Dutton (Timothy Olyphant) to try to make sense of what’s happening and help the few unaffected souls to survive. — Arts Editor.