No bad blood as Ford leaves to coach overseas

AN international coaching opportunity was the reason for coach Graham Ford’s sudden departure from the Dolphins, president of the KwaZulu-Natal Cricket Union Fa-eez Jaffer confirmed yesterday. ... 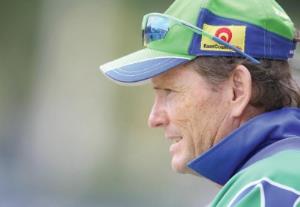 AN international coaching opportunity was the reason for coach Graham Ford’s sudden departure from the Dolphins, president of the KwaZulu-Natal Cricket Union Fa-eez Jaffer confirmed yesterday.

Ford resigned from his post at the Dolphins on Tuesday and leaves the franchise in last position on the SuperSport Series table.

Ford’s new coaching position has yet to be confirmed, though it has been reported that he could be on his way to the sub-continent.

Ford had been previously linked with the Sri Lankan coaching position, which was eventually awarded to Australian Geoff Marsh, who has come under recent pressure after a string of poor results.

“I can’t disclose the nature of the position, but I can confirm that it is an international post,” Jaffer told The Witness.

The union’s president added that there was no bad blood between Ford and the Dolphins amidst reports that Ford’s authority had been questioned regarding his selection policies during his time in Durban.

“We left on very good terms and we completely understand Graham’s wanting to leave — we will never stand in the way of one of our coach’s international ambitions,” Jaffer said.

Jaffer confirmed that he had agreed to still be a part of the Dolphins set-up until a new coach was appointed.

“He will still be with us and we still have a great relationship,” Jaffer said.

The process of finding a replacement has begun and no frontrunners have been named at this stage.

“We want to find a replacement as soon as possible,” Jaffer said.

“Our team of directors has met and each of them is working on different options as we speak.”

Jaffer added that while the news of Ford’s resignation is a setback, the cricket union remained optimistic moving forward with the rest of the season.

“It is a time when we need to stay positive, we have spoken to the senior guys in the squad and they know that they need to dig deep now,” he said.

“We still have the T20 competition to look forward to.”

The Dolphins will be joined by West Indian opener Chris Gayle for that competition. His move to Durban was largely driven by Ford.

“I don’t think it [Ford’s resignation] will have such a big impact on him [Gayle],” said Jaffer. “Graeme will still be around.”