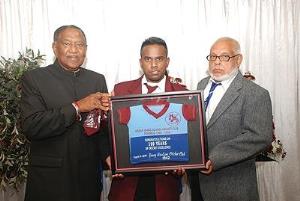 The function was attended by past and present members as well as leading figures from the ranks of the non-racial sporting fraternity. Speaker Babs Sithapersad reminded those present of the South African Council of Sports (Sacos) rallying cry that “there is no normal sport in an abnormal society”. He urged those present to maintain the foundation set by their forebears and keep sport alive among young people to keep them healthy and away from such influences as drugs and alcohol.

The Guest Speaker for the evening was Yusuf Bhamjee, Umgungundlovu district mayor, who was described by Krish Reddy — the MC for the evening — as an outstanding all-round sportsman. Bhamjee congratulated the club for staying the course. He said a hundred years ago there were no opportunites for black sportspersons as they were collectively excluded from national selections and were denied sporting facilities. “During those trying years the pioneers of your club grasped the challenge and, with tenacity, perceived and produced some of our finest cricketers and sports administrators,” he said.

A centenary brochure on the history of the club has been produced. Sathiah Nulliah said his grandfather, Charlie Nulliah — a founding member of the club, managed to get a sports ground for the club. He did this by trading off a piece of land he owned to the city council. The council wanted the land for a polo ground. He told them he would agree on condition the corporation gave the Indian community a sports field.

The club was named after the first Indian high school in the city. The name changed from Higher Grade School to York Road School and then to Woodlands. Among the many people honoured in the evening were the Nair and Moodley families who have had several generations of family members play for and support the club. Reddy, who compered the evening, kept guests going with a host of sporting jokes. He is also a former cricketer and patron of the KwaZulu-Natal Cricket Union.