ONE hundred “patients” were admitted to Northdale Hospital yesterday in a carefully managed drill to see how the hospital would cope with a disaster during the 2010 World Cup. ... 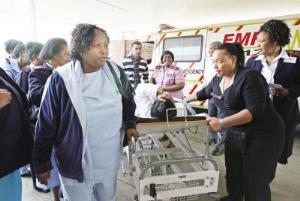 ONE hundred “patients” were admitted to Northdale Hospital yesterday in a carefully managed drill to see how the hospital would cope with a disaster during the 2010 World Cup.

Patients were bused in by EMRS medical rescue having “ suffered” concussion, fractures, broken arms and legs and minor bruises. Although the arrival of ambulances lacked a sense of urgency, the drama started inside the casualty ward.

“Twenty patients are critical, 25 are serious and 45 suffered minor bruises,” Northdale Hospital CEO Zanele Ndwandwe told the Witness and continued to give orders to staff.

The casualty ward was crammed with paramedics pushing stretchers, doctors and nurses. Some of the medical staff simply wandered around and watched the drama unfold.

“This place is overcrowded. We must clear the passageway,” one of the matrons shouted.

The Witness asked Ndwandwe if the hospital would be able to accommodate all patients, including those who were not part of the “disaster”.

“We have cleared the casualty for the disaster. We are stretched, but we have put measures in place to make sure all patients are treated.”

She said casualty was reserved for critical patients (red code), and another area for severe to minor injuries (yellow and green codes). The Witness had been invited as the media representative to be actively involved in the exercise.

Ndwandwe said the purpose of the drill was to learn how to handle disaster situations when role players such as the media were involved.

“It was a successful exercise, we wanted to measure our readiness in handling mass casualties.

“We wanted to see whether we have enough equipment and staff … to use in a disaster situation while we continue with our day-to-day running of the hospital.”

Representatives from Imbalenhle clinic, Edendale and Grey’s hospitals as well as a team from the Mgundundlovu district health department attended the exercise.