INTERCONTINENTAL friendship went a step further in Northdale yesterday when 11 children who have shown an aptitude for Italian received cash prizes sponsored by the Italian government... 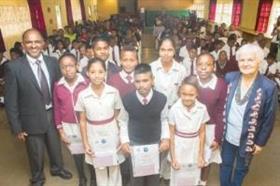 INTERCONTINENTAL friendship went a step further in Northdale yesterday when 11 children who have shown an aptitude for Italian received cash prizes sponsored by the Italian government.

Northlands Primary School in Pietermaritzburg is the only government school in the country that offers free Italian lessons to over 300 pupils, an initiative started four years ago when Graziella Maggesi, founder of the local Società Dante Alighieri, began teaching about 40 children. At the time, Maggesi was also working with another organisation, Un Ponte Per la Vita (A Bridge to Life), which was giving food to a small group of needy children at the school. Northlands serves a poor community and over 400 children at the school receive free meals and school uniforms sourced from various sponsors.

Maggesi suggested to headmaster Vishnu Naidoo that food for the mind might be beneficial too, and could reach more children.

“To give food only helps a small group. Helping the school helps everybody,” she explained. “I said Italian can broaden the horizon of the children and open the world to them.”

The classes were a success and Maggesi suggested offering them to more children. Nine classes from Grade 4 to 9 now have one half-hour class a week, and the top pupil in each class was awarded a prize of R1 000 yesterday to be used for school fees and pocket money. In two classes, two pupils shared the prize, making the number of recipients 11.

Maggesi would like to organise a trip to Italy for the top pupils, but must first raise the money needed. In the meantime, the school has had a steady flow of visitors including representatives from the Italian consulate. It’s also received money for chairs for the computer room.

Earlier this year, the grade three class was twinned with a similar class at an Italian primary school, Scuola Elementare Niccolo Machiavelli in San Casciano, Florence, with the aim of starting a cultural and social exchange of experiences of daily academic life between the children.

“It’s phenomenal,” said Naidoo about the impact of the school’s brush with Italian. “The response from the children has been amazing. There’s much more interest in Italy and more books are being read, not just on Italy but Europe itself. It shows them that there’s more out there. It’s really opening up their minds.”