Our culture of blame

Scapegoating has become part and parcel of life in South Africa today. 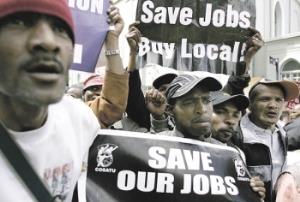 Although its roots stretch back far into the past,

during the past 10 years or so in South Africa the habit of searching for a scapegoat to blame for our troubles has reached crisis proportions. We are all involved — with very few exceptions. Whether we are black or white (or any other shade of colour), young or old, rich or poor, politicians or journalists, religious or non-religious, we now play what some people call the “blame game”. When faced with a problem of almost any kind we look around for someone to blame.

Whites blame blacks and blacks blame whites. For almost anyone who is looking for a scapegoat, the government is fair game — not to mention the president himself. Others blame the media for our woes. Then there are those who are still intent on blaming apartheid for everything that goes wrong. The churches, unfortunately, are past masters at imputing guilt and blaming sinners of all kinds. That is not what Jesus Christ himself did. But there you have another story for another time.

The last straw is our inclination when there does not appear to be anyone around to blame, as in the case of a tsunami or an earthquake, to blame God.

I am not suggesting that nobody is ever to blame for anything. Surely some people are sometimes guilty – seriously guilty. But pointing fingers

doesn’t solve our problems, as we all well know. In fact, it often entrenches our problems and can even become extremely dangerous. Perhaps the recent outbursts of xenophobic violence can open our eyes to the

In our present deep-seated culture of blame we should not be surprised to discover that some of the most vulnerable people in our society are open to suggestions that the foreigners in their midst are to blame for their sufferings. Those who have no jobs, no proper housing, no money and no hope for the future will want to complain to their local councillors and other representatives of the government. But these people are far away and anyway, they don’t seem to be listening.

When it is suggested that the foreigners in their midst are to blame because they are getting the jobs and the houses and are responsible for the crime in the township, they become the scapegoats who must be “sacrificed” or thrown out into the desert like the classical scape-goat in the Bible (Leviticus 16:10,20-22). This goat was allowed to escape into the desert burdened with all the evils of the society.

What horrified us all about the recent xenophobic scapegoating, however, was that it was not goats but humans who were targeted and that it be-came so visibly violent and murderous. My argument is that this violence is part and parcel of the same culture of blame that we experience everywhere in our society today.

What then is the alternative?

We need to create clear and well-understood channels for complaint and protest. While we do not want to go around pointing fingers, we need to be able to lodge our complaints and grievances somewhere, and we need to be sure that we will be listened to. Listening, of course, is a two-way street. We need to learn patient and respectful communication. While our protests need to be loud and clear, accusations, condemnations and insults do not lead to better communication.

The second alternative to blame is co-operation. We need to look for ways of working to-gether to solve our problems. There will always be some who, for whatever reason, do not want to co-operate, but that does not prevent others from trying to do so.

The temptation to blame will always be strong. It is part of our history. We learnt to blame the apartheid government for almost everything. Many thought that once apartheid was dismantled all would be well. The most violent form of scapegoating, of course, was the

On the other side those in power blamed the Soviet Union and international communism for the uprisings against apartheid and punished the “instigators” with unbelievable cruelty.

Then, too, we inherit an African tradition in which when some of us have problems we want to know who has cast a spell upon us. That too has contributed to our present culture of blame and scapegoating.

But we also have a remarkable history of negotiation, healthy compromise, co-operation, reconciliation and forgiveness. In the early nineties that was our claim to fame.

Can we not return to that and build on it?

• Albert Nolan is a South African theologian and author. He belongs to the Dominican Order and lives in Pieter-