FIVE teachers were yesterday removed from Grange Primary after angry parents stopped staff from entering the school by blocking the entrance gates.... 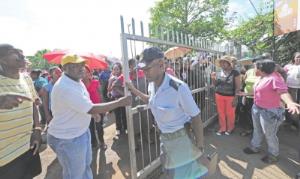 FIVE teachers were yesterday removed from Grange Primary after angry parents stopped staff from entering the school by blocking the entrance gates.

Saying that their complaints to the school and the Education Department about teachers not delivering had fallen on deaf ears since 2009, they insisted on the removal of the five staff members.

By midday, after a meeting in the school, their demands had been met.

“Our children come home and tell us that instead of teaching, their teachers sell them sweets and sleep,” parent Phumzile Ngcobo said at the morning protest.

“This is painful to hear because we pay school fees for an education that our children are not getting.

“We have voiced our concerns over and over with the school but have received no joy, so protesting is our last option.”

Police maintained a heavy presence outside the school as parents in the crowd of around 50 people sang Umshini Wami and waved placards.

One read: “Since 2009 teachers are destroying our kids’ future, they must go away”.

One parent incited the crowd by revving her car’s engine.

“I was just trying to explain to the police officers that my friend did nothing wrong and this one officer started slapping me on the back,” said Shezi.

“I do not understand why he did that because I was not even violent or carrying a weapon.

“It was really uncalled for and I am considering opening a charge of assault.”

Meanwhile, inside the school the governing body, principal and Education Department officials met.

South African Democratic Teachers’ Union (Sadtu) members were unhappy they could not represent their members.

The union’s district secretary Nonhlanhla Mdluli said Sadtu was not against the steps the parents took, but was dismayed that no evidence had been presented that the teachers in question had not been doing their jobs.

“We need to know what the root of the problem is, because the teachers have shown us proof that they are teaching in class,” she said.

“We have had no report from the principal detailing how these teachers have defaulted so we are starting to suspect that there is another agenda being pushed at the school.

“We are still investigating whether the Education Department has been following procedure because we cannot have our members being chased away from schools because the parents do not like them,” Mdluli said. After the meeting, there were cheers and ululations in the school hall where parents gathered to hear that the five teachers would be dismissed.

Education Department spokesperson Mbali Thusi said that they will be meeting at the school today to discuss a way forward.

“The teachers will report to the circuit office today where they will be doing work until a permanent solution for this issue is concluded.

“To ensure stability at the school the rest of the teachers will be sharing their workload,” she said.