A DURBAN grandmother, who claims she was the victim of a parking rage attack, wants help to nail the bully... 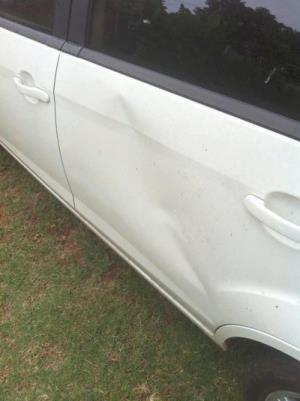 A DURBAN grandmother, who claims she was the victim of a parking rage attack, wants help to nail the bully.

Carol Deeble (61) said she was attacked by a tall, slim, white man in his 30s outside the Woolworths Food store in Mackeurtan Avenue, Durban North.

Deeble had stopped at the store on Sunday afternoon to get something to eat, when the man boxed her Ford Figo in with his white Toyota Fortuner.

There were only a few centimetres between her driver’s side door and the Fortuner’s passenger door.

Deeble said she rolled down her window and sarcastically thanked the man for giving her plenty of space to open her door.

“He first told me there was space to get out on the other side [passenger’s side] but then he got out of his car.”

She said the man’s wife and young daughter watched as he approached her car.

“He started kicking in the door on the passenger side. He seemed so enraged for some reason; I can just not figure out what sparked his rage,” she said.

Deeble said she watched terrified in her rear-view mirror whilst the man tried to get on top of the car and began hitting the roof.

“He hit the car several times as I tried to exit the parking lot. Eventually, I saw that he had picked up a brick and that was when I managed to get out of the parking lot. Terrified, I sped off watching him run after the car, this time holding two bricks,” Deeble said.

“I managed to get away with no physical injury but I am very scared. I thought about going back to the scene to see if I could get his number plate, but I was petrified he would come after me again.”

Deeble said she had been too scared to go anywhere on her own but due to work commitments, yesterday had been the first day she had driven her car since the incident.

“I am scared he will notice the car and attack me again.”

Deeble’s daughter, Andrea Ording, said she was disgusted and angry with her mother’s attacker.

“He was a coward because he did not go up to my mother directly to discuss his issues, rather he damaged the car.”