TYRONE van Aswegen is playing his first tournament in South Africa since gaining his PGA Tour card and is hoping to celebrate further as he heads into the weekend of the Alfred Dunhill Championship just two strokes off the lead... 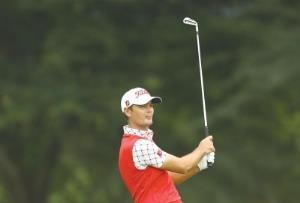 TYRONE van Aswegen is playing his first tournament in South Africa since gaining his PGA Tour card and is hoping to celebrate further as he heads into the weekend of the Alfred Dunhill Championship just two strokes off the lead.

A 68 at a cool Leopard Creek yesterday has put Van Aswegen at six under par and two behind defending champion Charl Schwartzel and Denmark’s Morten Ørum Madsen, who share the lead on eight under par.

And the lead Van Aswegen is chasing this weekend forms part of the bigger dream he’ll be chasing on the PGA Tour in 2014.

“Getting my PGA Tour card was such an unbelievable feeling. Just to know that I have achieved that was one of the best moments of my career,” Van Aswegen said.

Van Aswegen has spent the last few seasons on the Web.com Tour trying to qualify for the PGA Tour. This year he got it right when he made it through the Web.com Tour Finals and claimed one of 25 cards on offer.

And suddenly his world changed.

“Two weeks prior to that I was bidding for good prices on rental cars. Then I got my card and all of a sudden I was given a fancy Mercedes-Benz as a courtesy car. The PGA Tour is a different world in that sense. There are a few perks like the courtesy cars, and everything on the PGA Tour is just bigger — better food, better locker-rooms and so on. It’s a bigger stage.

“The courses are not that different to South Africa. It’s just about learning these new courses now, whether they’re tougher or easier you just need to learn those subtle changes.”

Van Aswegen decided to play at Leopard Creek as an opportunity to take in his favourite tournament and work with his coach Robert Baker before flying out to Hawaii early in January 2014 for the Sony Open.

“Keeping my PGA Tour card is my first goal. But who knows. It would be nice to get a win and play in a few Majors.”