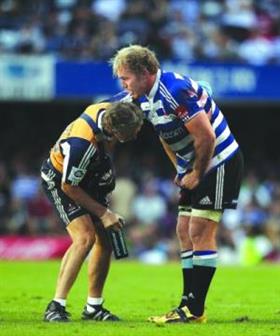 With scrumhalf Ricky Januarie (knee) ruled out of the tour on Saturday evening, three Western Province players have now been withdrawn from the tour party after injuries suffered in the torrid Durban final.

Burger and De Jongh underwent scans in Johannesburg yesterday and were immediately ruled out. Burger has a broken rib following a crunching tackle by Sharks flank Willem Alberts, but he bravely played on to the end, while De Jongh suffered a hairline fracture to his left ankle and left the field in the first half of the final.

Experienced Sharks centre Adi Jacobs, who was on stand-by, has been drafted into the tour squad as a replacement for De Jongh.

Burger is replaced by the uncapped Blue Bull Deon Stegmann, while his Pretoria team-mate, specialist fullback Zane Kirchner, has also been added to the squad to restore the party to 30.

In the absence of Januarie, Ruan Pienaar will provide cover for Francois Hougaard at scrumhalf.

The Sharks and Blue Bulls now both have 10 players in the squad.

“It’s a blow to lose players, but we’ve rolled with the punch and already moved on,” said Springbok coach Peter de Villiers.

“We trained without them this morning and we already had contingency plans in mind, which we’ve begun to put into operation. It’s not an ideal situation, but we’ve all got on with our jobs and are focused only on the players that we have in camp.”

“We’ll give the players some more time in rehab before we confirm the team,” said De Villiers. “We have the line-up in mind, but want to make sure everyone’s fit before making the announcement.”

The loss of De Jongh, following on the injuries to Jaque Fourie and Wynand Olivier, has highlighted the Boks’ midfield problems and this is compounded by the fact that Frans Steyn, who could play at inside centre, will miss the Irish Test.

Jacobs has played only briefly since returning from his six-month break with a shoulder injury and Sharks coach John Plumtree did not include him in his match 22 for the final.

With only two specialist centres (Jacobs and Jean de Villiers) in the 30-man squad, there is no obvious back-up and the 20-year-old Sharks flyhalf Pat Lambie could find himself covering the Bok midfield off the bench.

De Villiers also has to find the right balance at loose forward following the injury to Burger, and there are a number of permutations. Willem Alberts could be a step closer to making his Test debut, but the Bok coach may opt for one of the more mobile flanks (Keegan Daniel or Stegmann) to complement Juan Smith and Pierre Spies.