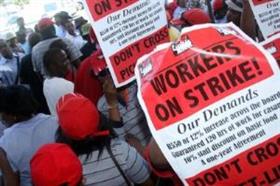 Businesses at gate three were affected as members of the South African Commercial, Catering and Allied Workers’ Union (Saccawu) picketed outside the entrance, forcing mall security to close the gate.

Liberty Properties centre manager Cassy Fourie said entrance three in front of Pick n Pay was closed to prevent the strikers from gaining entrance to the shopping centre and to ensure the safety of shoppers and tenants.

“We have opted to embark on a strike because the employer has not met our demands since we started negotiations in October last year,” said Zondi.

“All we want from the employer is a 12% increase on all salaries, which would be equivalent to R550.

“However, the employer only wants to give us R335.”

The workers will continue picketing until their demands are met, she added.

“We also demand a 10% discount when we buy anything at Pick n Pay because we work for them,” said Zondi.

She said the workers also want to put an end to labour brokers because they are only interested in making a profit by exploiting workers.

Pick n Pay spokesperson Helen Delight said: “The issue of this strike is around wages and conditions of employment, and it does not relate to labour brokers and centralised bargaining as these matters are dealt with by other forums.”

She said negotiations started in December 2009.

“The company hopes that this matter can be resolved as soon as is practically possible, because there are no winners in a strike,” said Delight.