When we have floods and storm water washing into the rivers we see the hyacinths grow due to the increase in nitrates and phosphates. it’s a combination of human sewage and agricultural waste. The hyacinths do filter a lot of the heavy metals out of the water, but they also starve the fish of oxygen and they can take over. — Field Manager for DUCT, Bart Fokkens 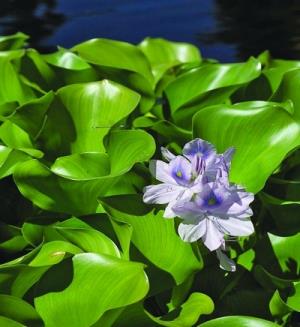 THE famous Unlimited Dusi Canoe Marathon always has one headache every year … the water hyacinth. But this tenacious alien species thrives due to human negligence.

Its long green tendrils sneak under canoes like ropes. Its thick stems block the waterways and frustrated paddlers find their arms working furiously to evade the green mass of it. It is to canoeists what quicksand is to the explorer.

A few weeks before the Ultimate Dusi Canoe Marathon race begins on February 16, race organisers and the environmentalists get together to check the hyacinth problem. Field manager for the Duzi Umgeni Conservation Trust (Duct) Bart Fokkens said that the water hyacinth gets out of control in the summer months when the weather is hot and the rains plentiful.

But he said that the plant also plays a positive role in the ecosystem in that it acts as a filter for toxins and pollutants.

The secret, said Fokkens, is to maintain a balancing act.

He has been using a three-pronged approach to reduce the amount of water hyacinth in the lower reaches of the Umgeni River and the Inanda Dam where it has become a problem.

“Where possible we try to find an ecological solution to a problem. There are bugs that feed on the hyacinth and we try to use those where possible, but it’s all about the timing. Sometimes they are too slow.”

Bio-control is fast becoming the green approach to handling alien or invasive plants. Fokkens says there are three goggas that are locally used to combat the hyacinth. A weevil­, called the neochetina, is host specific and loves to eat the flowering water plant. The second is the mirid eccritotarsus which destroys the hyacinth by sucking the chlorophyll out of the leaves. The third is a moth, which breeds rapidly. The niphograpta lays its eggs and the larvae burrow into the stems of the plant. When the caterpillars hatch they eat the stems of the plants and the plants sink.

Fokkens says: “I feel that I am conducting biological warfare. Good guys versus the bad guys. It’s very exciting because you have to watch and wait to see if these small insects are doing their job and you have to be patient.”

Fokkens gets the bugs from the Sugar Research Institute and it is the work of entomologists to study these alien plants and to find their natural enemies.

If these bugs do not do well due to climate or other factors, then other­ methods are also used. Fokkens and his team have been using herbicide to control overgrown vegetation along the banks of the river­ so canoeists can carry their canoes without too much problem.

At the Inanda Dam, where the hyacinths have experienced a growth explosion due to an increase in phosphates and nitrates, chemical sprays, to kill the plants, have been used. In addition, a machine which cuts and removes the plant, is regularly used.

“When we have floods and storm water washing into the rivers we see the hyacinths grow due to the increase in nitrates and phosphates. It’s a combination of human sewage and agricultural waste. The hyacinths do filter a lot of the heavy metals out of the water, but they also starve the fish of oxygen, and they can take over,” says Fokken.

Seven teams have been working in the rivers and dams to clear the water of excessive growth. They have been funded by the National Lottery and the Department of Water­ Affairs.

Ray de Vries, the Unlimited Dusi Canoe Marathon spokesperson, said they had done a final flyover of the course and had given the go-ahead for the final spraying of the Inanda Dam.

“We expect excellent results, and the course will be clear in time for the race.”