Playing British Lions is once in a lifetime for us, says Smit

JOHN Smit, the Springbok captain, believes that playing against the touring British Lions is the greatest opportunity available to South African rugby players.... 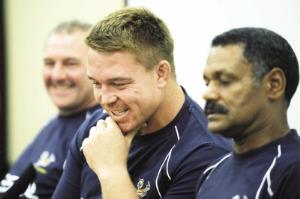 JOHN Smit, the Springbok captain, believes that playing against the touring British Lions is the greatest opportunity available to South African rugby players.

Smit, speaking in Pretoria yesterday, said that the honour of playing against the Lions was “almost more of a privilege” than it was for the tourists.

Smit will lead a below-strength South African training squad in a practice game against the Namibia XV in Windhoek tomorrow, but there is no doubt where his attention is focused.

“The guys from the four Home Unions get the chance to represent the Lions every four years, but we only play against them every 12 years. It’s a once in a lifetime for us,” said Smit, who captained the Springboks to victory in the 2007 Rugby World Cup.

“Some South African players have 100 caps, but don’t get the chance to meet the Lions. It will be a Test series the likes of which we (the players) will never see again, an incredible occasion.”

Smit said the Springboks would lift their game from the World Cup and would be more of a threat.

“We’ve moved forward from 2007 because we are really the same group of players, but with two more years of experience. I certainly don’t think we have regressed.”

He said the Lions, drawn from different countries, may lack the cohesion of an international team, but the passion and pride in their jersey would bring them together as a unit.

Meanwhile, national coach Peter de Villiers is testing the depth in the national squad, rather than the strength of Springbok rugby, by naming a second-string starting line-up to face the Namibian XV and it is difficult to see what purpose is served by playing this game.

JP Pietersen, Jean de Villiers, Juan Smith and Schalk Burger, all regarded as certainties for the first Test, were named on the bench as De Villiers has given a host of newcomers a chance to make an early impression.

De Villiers rates the unpredictable Lions utility back Earl Rose exceptionally highly and he will start at fullback tomorrow, while centre Morgan Newman, who has been well down the pecking order at the Stormers, is to partner Meyer Bosman in midfield.

Bok backline regulars Adi Jacobs, De Villiers and Pietersen are all on the bench, along with the two first-choice flanks, Smith and Burger. Flank Heinrich Brussow, strongly favoured by those who see it as critical to take on the British Lions at the breakdown, and the Sharks’ burly Jean Deysel are on the side of the scrum.

The Bok squad for the Lions series will be announced on Monday.