Plum looks to JP for centre

IT is a bold move but Sharks coach John Plumtree is looking to big Springbok wing JP Pietersen to help solve his midfield problems.... 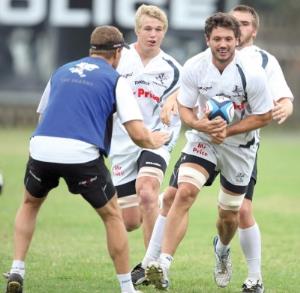 IT is a bold move but Sharks coach John Plumtree is looking to big Springbok wing JP Pietersen to help solve his midfield problems.

The Sharks backline, first in Super Rugby and then in the Currie Cup, battled to play with any fluency last year as Plumtree tried various midfield combinations.

Meyer Bosman, Stefan Terblanche, Adi Jacobs and Marius Joubert, all former Springboks, were mixed and matched at various stages, but failed to make the expected impact.

Terblanche and Jacobs have now left Durban and Plumtree is considering other options. Tim Whitehead has been signed from the Stormers, but Plumtree wants to test Pietersen in the midfield.

Pietersen started his career with the Sharks at fullback, but was then switched to the wing and has been a first-choice for the Springboks for the past five seasons. At 1,90 metres and 102 kg, he has all the physical attributes of an outside three-quarter.

“We’ve changed a couple of philosophies of our midfield play,” said Plumtree, “but the proof of the pudding will be in how we play.

“We’ve got firepower up our sleeves and we’re experimenting with JP Pietersen in the midfield.

“It’s something we’re really interested in. He’s got a lot of experience and he’s a big presence in the middle of the field. Defensively he’s very big and strong and in terms of attack he’s outstanding.”

Pietersen, a mood player, does have the tendency to go missing for long periods while out on the wing and Plumtree is aware of this shortcoming.

“JP will need a transition in his thinking and to improve his work rate,” the Sharks coach admitted.

Plumtree said Pietersen would “get an opportunity in the trials at 13 [outside centre]”.

“We also have Tim Whitehead who has played in that position and Paul Jordaan [former SA U21 and sevens Springbok] who excites us with his x-factor. Paul played flyhalf and centre for the Sharks U21s last year and he’s flirted with wing and fullback.

“He likes being close to the ball and we could see him becoming more of an impact player. We’ll see how he goes, there is a bit of excitement around him.”

“They have both had big pre-seasons and are looking fit.”

Plumtree has options on the wing if he does move Pietersen into the midfield. Exciting attackers Lwazi Mvovo, Odwa Ndungane, sevens Springbok Sbura Sithole and Louis Ludik — now that fullback Riaan Viljoen has arrived from Griquas — are all challenging for places.

The Sharks will have Pat Lambie at flyhalf, but Plumtree said Frederic Michalak, who is returning to France at the end of the Super Rugby season, would be breathing down his neck.

“Fred’s future obviously isn’t here, but he’s a competitive character and he won’t let Pat Lambie take the jersey without a fight. Fred can also play at nine [scrumhalf] for us. He’s not prepared to just make up the numbers, so he’ll be pushing hard.”

The Sharks coach said he was pleasantly surprised at the fitness levels of lock Steven Sykes, who has returned from Ireland to join the squad.

“He’ll fit right back in seamlessly. He hasn’t been away that long and I’m not too worried about him. He’s in good nick conditioning-wise and he trained really hard before he came back here.”

Plumtree said there was fierce competition between Ross Skeate and Alistair Hargreaves for the No.5 lock position.

“They are both determined to dominate the middle of the lineout, and look after that role. But there is some good pressure coming from the youngsters, and they know that. That will keep them honest and that’s what we need.

“We’re looking for some big performances week in and week out and the players will be under pressure to deliver and keep delivering. That’s how professional rugby should be.”