PMB pair do the city proud 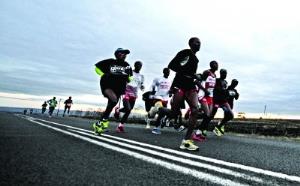 “MARITZBURG’S the place to be!”

That was the sentiment shared by Kerry Koen and Bongmusa Mthembu, who earned a number of awards in yesterday’s 87th Comrades Marathon from the Pietermaritzburg to Durban.

Koen — who finished ninth in the 2011 up-run — made a dramatic improvement to take the fifth gold medal in six hours, 45 minutes and 45 seconds, and in doing so she earned the awards for first South African and first KwaZulu-Natal resident to finish in the ladies race.

“Its amazing, Bongmusa has won the [KZN] award and Farwa [Mentoor] had virtually made the first South African her own, but today I felt I had a chance at it,” said the mother of two, who has part time research work that gives her more flexibility to train.

Originally running for Collegians Harriers, Koen moved to Nedbank, but this year was offered a contract with the Bonitas club, which would allow more training and contribute to the high cost of preparation.

Clearly it worked as the combination of awards gave Koen a R207 000 pay day, while Mthembu accrued R160 000 for his second place and first KZN award, which he won for the third consecutive year.

The 28-year-old Mthembu came fifth in this year’s Two Oceans Marathon in the Western Cape. He is the fifth of sixth children with three brothers and three sisters whose family home is in Bulwer.

He lives and trains in the city, a mere 300 metres from the Comrades start, and had a previous best position of third from the 2010 race.

“It’s great — it proves our province is working hard and soon people will be waking up to realise that we can do these things”, said the beaming Mthembu, who hugged and laughed with Koen when they met before the prize giving.

“I am so proud of her [Kerry]. She used to train with us, but had to stop due to work. It’s sad because I think she can be even stronger. This shows there is talent in the city,” he said.

Petros Sosibo of the Phuma club is also a member of the training group and earned the final men’s gold medal in five hours, 40 minutes and 37 seconds and just missed out on a 40 -49 age group award where he was placed fourth.

Chairperson of the Natal Carbineers club John Hall said he was “immensely proud” of the two Pietermaritzburgers.

“It was special for us. They both took part in the flame relay for the Weekend Witness Maritzburg Marathon. We know them both very well and this is so exciting,” he said.

The flame came to KwaZulu-Natal earlier this year from the Ancient Greek city of Marathon and was used to ignite an African crucible in the Carbineer Garden of Peace alongside the city hall.