Poetry loving rebel with a cause

Contrary to the politics of the time, King’s School accepted children of all races 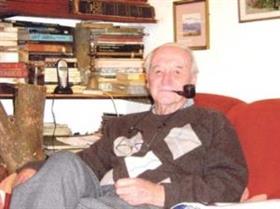 On a cold morning in winter the living room in John and Mary Mitchell’s cottage adjacent to King’s School in Nottingham Road is a comfortable place to be with a log fire crackling in the hearth and a litter of books and magazines beneath stacked shelves. That Mitchell smokes a pipe completes the picture. Fox, a local mixture, is his current smoke.

Mitchell, who retired as headmaster of King’s in 1990, recently turned 80. His birthday celebration at the school drew teachers and past pupils from as far as Britain, Australia and Zambia to pay tribute.

King’s School, a coeducational primary school for day children and boarders, was one of the first private schools to admit children from all races and enjoys an enviable reputation not only for its educational standards but the sheer delight of going to school there. “The school boasts a relaxed family atmosphere. It’s more like a big family than a school,” I was told by somebody with a long association with the school.

King’s was founded by Sidney Edminson in 1922 as a school to prepare boys for entry to Pietermaritzburg College and Durban High School. Mitchell’s father, also named John, was appointed headmaster in 1938. Mitchell himself joined the staff in 1950. “I was teaching in England and realised from the letters my father wrote that he needed help, so I came back and ended up helping for 40 years.”

Mitchell took over as headmaster on his father’s retirement in 1955, in turn handing the principal’s baton on to his daughter, Tanya, when he retired in 1990.

Mitchell was born in Pietermaritzburg in 1928 and received his primary education at Milton Junior School in Bulawayo in the then Rhodesia where his father had a teaching post. When his father was appointed headmaster of King’s in 1939, the son followed. From King’s, Mitchell went to St Aidan’s, the Jesuit College in Grahamstown. The Mitchells are a Catholic family although, as Mitchell points out, King’s “has no particular religious affiliation, it’s non-denominational and non-racial”. The only Catholic echo is the school’s French motto Quant Je Puis — which translates As Much as I Can — a motto it shares with the famous Stonyhurst College run by the Jesuits in England.

The motto reflects Mitchell’s approach. “He has a humane-educationist view of things,” I was told. “He regards people as important. It’s important for people to work hard, to use their talents as fully as they can and to have a generous world view.”

Mitchell went to the Pietermaritzburg campus of the University of Natal in 1944 and studied English and psychology. Mitchell’s love of English is legend, a love kindled in boyhood. “There was a Scottish teacher at King’s called MacDonald who inspired in me a love of poetry — something quite remarkable for those days, or any day for that matter.”

It is a love Mitchell has tried to pass on. “I made the children learn a poem a week. At first they didn’t like the idea, but subsequently they did. Poetry became part of their emotional and intellectual background.”

In 1948, Mitchell went to England and taught at Edge Grove Preparatory School at Aldenham in Hertfordshire; in those days reminiscent of the prep school satirised by Evelyn Waugh in Decline and Fall. “There was more time spent teaching Latin than English, which seemed rather odd to me,” he says.

Then came his father’s call for help. “In those days you couldn’t just hop on a plane,” says Mitchell. “You had to come by ship. I went around the shipping offices looking for a berth.” He found one and left for Cape Town the next day.

“The decision to come back was not an easy one,” he says. “I was young — at the time in life when you want to go out into the world — but on the ship, when I saw the Southern Cross in the night sky I nearly started crying. It took me quite by surprise. I obviously had to come back here.”

Mitchell began teaching at King’s in 1950 and two years later married Mary Buttermer. “We first met on her father’s farm when I was four years old,” he says. Asked about her involvement with the school Mary modestly says she “catered and looked after the girls”. Mitchell is more forthright: “She was as much a part of the school as I was.”

Others confirmed the role the couple played in making King’s such a distinctive school: “Together they created a special atmosphere: small, intimate and very family orientated.”

That warmth did not come at the expense of discipline. “The school was a spartan school,” says Mitchell, “but there was a great deal of love around. And that combination of spartan discipline and affection made the children what they grew up to be.”

Mitchell came back to King’s shortly after the National Party came to power in 1948. By the time he took over as headmaster in 1955 apartheid was in full cry. “I took a position on it,” he says. “When I took over as headmaster I thought it of little relevance just teaching children the customs and manners of the ruling classes. I set about making it clear that colour is not a determinant.”

Mitchell says several people played a significant role in developing his outlook on life and politics. He mentions Peter Brown, Hans Meidner, Bill Hoffenberg, Sam Chetty and Alan Paton — all members of the Liberal Party. “They were all very significant in the development of my socio-political philosophy,” he says. “Peter Brown and I became close friends. We spent a lot of time in the Berg together. Alan Paton spoke on several occasions on our speech days — sometimes at very short notice!”

Another invited speaker was the academic and former city councillor, Colin Gardner, a King’s board member. “I was asked to give a speech in 1964 or 1965,” Gardner recalls. “Those were the days when headmasters kept their heads down and didn’t want to be embarrassed by anything political. When I asked John what I should speak on he said ‘whatever you like’. Then he added ‘For God’s sake, make it political’. King’s was really prepared to stick its neck out and be unusual.”

Going co-ed in 1967 wasn’t so much unusual as inevitable. “We had seven daughters,” Mitchell laughs. On reflection he recalls the move was brought about as something of a fait accompli. “Some parents arrived for the new school year with their son, who was already a pupil, and they also brought his sister. She was dressed in school uniform. I didn’t know what to do. I phoned Sally Edwards, the matron, who had a daughter, Lisa. I asked if the girl could share a bedroom with Lisa.” Thus King’s became co-ed. “The move was not a deliberate move on my part. But it’s so much more normal to have a co-ed school than a segregated one.”

In 1977, black children were admitted to the school contrary to the National Party’s apartheid policies. Eventually, in 1986, this led to the loss of the government subsidy. “The conditions were such that we couldn’t apply for one,” says Mitchell. “We exceeded the racial distribution they allowed.”

At this point a trust, chaired by Peter Brown, was formed to take over governance of the school. “I was always afraid that the school might be closed down,” says Mitchell. “That’s why I got a powerful board of trustees, in the hope we would be treated more carefully.

“The school was suspect in the eyes of most people. We were mainly boarding then because the local community didn’t go along with what we stood for. A lot of academics sent their children here. I never drew on an affluent body of parents and only half could afford private schools. About half the children went on to Kearsney, the other half to the better government schools.”

Mitchell taught English and history: “But at a prep school you end up teaching everything, I even taught maths for a while.”

After retirement he and Mary moved to Widenham on the KwaZulu-Natal south coast. “But I got intensely bored. I got tired of fishing, got tired of walking and got tired of drinking beer. I needed to use my mind more.” They came to live at the cottage next to the school and Mitchell taught at the school on a voluntary basis. Now, according to Mary, he has become “the best house husband there is”.

Theirs is an open, welcoming home and current teachers at King’s often drop in for advice and encouragement. “It’s good to tap into his experience,” says one. “His tips are quite useful. He also reaffirms and encourages what we are trying to do at King’s.”

Of his own time at King’s, Mitchell says it was “a socio-political adventure, one that to a great extent succeeded, succeeded in making children of all colours accept each other”.

“If I had what today would be called a ‘mission statement’ it would be that I like children to be brave, compassionate, colour-blind and alert — it would be as simple as that.”