THE Sharks have yet to be officially informed, but French club Bayonne have announced the signing of South African flyhalf Jacques-Louis Potgieter. 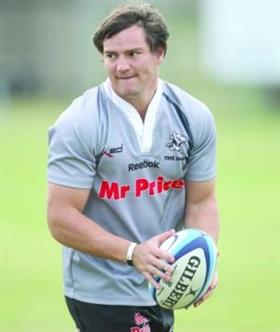 THE Sharks have yet to be officially informed, but French club Bayonne have announced the signing of South African flyhalf Jacques-Louis Potgieter.

The 27-year-old Potgieter, who has played Super Rugby for the Cheetahs and the Bulls and is under contract to the Sharks, has travelled to France for a medical.

“We haven’t heard from him or his agent since he travelled to France,” Sharks CEO Brian van Zyl said last night.“We know Bayonne are keen to sign him, and we would not stand in his way, but we cannot release him until we are officially contacted.”

The chunky utility back was signed from the Bulls ahead of the 2011 season and there was some excitement when he arrived in Durban. But Potgieter never made the expected impact and he was frequently overlooked by coach John Plumtree as Pat Lambie and Frederic Michalak were preferred at flyhalf during last year’s Super Rugby and Currie Cup competitions.

Potgieter first played for the Bulls in 2007 before moving to the Cheetahs a year later. He returned to Pretoria in 2010 and a year later was in Durban. Today he is brushing up on his French.

Meanwhile, in Cape Town, former Sharks captain John Smit is talking up his old team-mates ahead of the Super Rugby season.

Smit admitted that the Sharks had under-achieved in recent years after their talented squad had topped the log in 2007, finished third in 2008 and then ended sixth and ninth in the following two years. They did reach the quarter-finals last year, but were beaten by 30 points by the Crusaders (and Bryce Lawrence) in New Zealand.

Smit is in Cape Town on a week’s training camp with the Saracens and told the keo website that the Sharks had the squad to make an impact this year.

“It’s been a disappointing three years for the Sharks when it comes to Super Rugby. We haven’t finished higher than sixth during that period. Considering the squads we had at our disposal, that’s a massive underachievement.

“Looking ahead to the new season, the Sharks have another great squad— one that’s not short of talent. I don’t think the loss of experienced guys like me and Stefan Terblance will hamper their progress in any way. Keegan Daniel led a young, depleted squad to the Currie Cup final in his first season as captain.

“That proves that there’s great depth and some good leadership. But they can’t depend on certain individuals or on one specific player to lead from up front. Every guy needs to take ownership in order for the team to take the next step.

‘The Sharks have what it takes to make the play-offs. They could even go on and win the competition if everybody plays their part,” the former Bok and Sharks captain said.

Smit said he agreed with Plumtree that the Sharks need to rotate players more during the marathon tournament.

“Plum hit the nail on the head. The South African squads need to keep their players fresh and fit and the coaches will need to be brave enough to depend on the reserves to play a bigger role.

“Coaches have to be confident that all their players can do the job on the field — they can’t expect the same guys to feature week in and week out. That’s something that Saracens have done well and is one of the reasons they have been so successful.”