LOCAL schools are positive about their matric examinations and principals are aiming for a higher pass rate.... 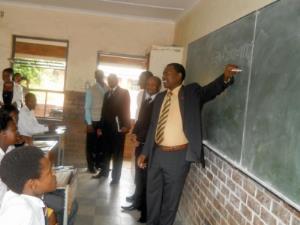 LOCAL schools are positive about their matric examinations and principals are aiming for a higher pass rate.

The premier urged the pupils not to take unreasonable decisions when the results come out and they discover that they have not passed.

“As you start your final examinations we want you to know that you have our support. Ours is to wait for the final whistle and buy newspapers to see the results.

“Those who fail must not think that it is the end of the world.

“The right thing to do is to come back and do right where you have done wrong. You are the future leaders of this country,” said Mkhize.

Amakholwa High School principal Mthokozisi Chonco said he is expecting a 100% pass rate as they had no stumbling blocks in their preparations for the examinations. The school has 88 grade 12 pupils.

Last year’s pass rate at the school was 75%.

Shabalala said they had made up for the time lost during the World Cup and the public service strike which brought teaching to a standstill in several schools.

“During the strike three weeks was lost. In subjects such as mathematics and languages we lost 15 hours while 12 hours was lost in other subjects,” said Shabalala.

“All these hours have already been re-capped as we had classes during the holidays.

“During the strike learners were coming to school depending on the availability of teachers. It was our policy to finish our syllabus in August 15, so we have been on track all the time.”

Education spokesperson Muntu Lukhozi said the department has sent crack teams to schools with a history of poor pass rates to identify problem areas and the problem schools have been given the necessary support.