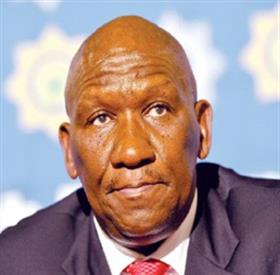 Cele is the second consecutive police commissioner to leave office under a cloud. He was appointed to succeed Jackie Selebi, who was later convicted of corruption and is currently serving a jail term.

The decision to fire Cele is in line with last month’s recommendations of the Moloi board of inquiry, which found that Cele was not fit to hold office and lacked capacity to execute his job.

The three-member board, headed by Judge Jake Moloi, was established by Zuma after Public Protector Thuli Madonsela’s investigation into two police headquarters lease deals, in which Cele’s involvement was found to be improper and amounting to maladministration.

While sources confirmed that Cele had been told to go, they declined to go on the record, saying it was the president’s prerogative to make the official announcement.

Presidential spokesperson Mac Maharaj said last night he had noted the rumours, but could not confirm or comment on them.

“It is safe to say that the president will make an announcement on this matter once he is ready.”

The Witness has reliably learnt that Cele was officially informed of his dismissal this week.

It appears the presidency decided to hold off making the announcement until after the court application by rights group Freedom Under Law for an interdict against suspended crime intelligence boss Richard Mdluli.

The high court in Pretoria yesterday interdicted Mdluli from performing any official police duties pending FUL’s high court review of the decision to reinstate him as crime intelligence chief, despite allegations of murder and corruption levelled against him.

Meanwhile, the man tipped to take over from Cele, labour director-general Nathi Nhleko, was overseas and could not be reached for comment. Acting police commissioner Nhlanhla Mkhwanazi, who appears to have burnt his bridges over his tough stance against Mdluli, declined to comment. In his reaction,

Cele’s spokesperson Vuyo Mkhize would only say: “I’m certain if indeed the president has fired General Cele, he will be making an announcement to that effect pretty soon and therefore there can hardly be any need for me to entertain your speculation in this regard.”

Cele has previously indicated that he would seek a judicial review if he was fired, if only to clear his name, as he believed the board’s report was “fundamentally flawed”.

Mkhize told The Witness last month the report was “nothing but a crude hatchet job designed to dupe the president into believing that there is justifiable cause to rob South Africa of the services of the best police commissioner that the country has ever had”.

It was not clear whether any of the board’s other recommendations would be followed.

These included the suggestion that Cele’s relationship with property mogul Roux Shabangu, as well as with other members of the police service, should be the subject of a criminal investigation.

The fate of KZN police commissioner Mmamonnye Ngobeni, and the police’s chief operations officer Bonang Mngwenya — who received a roasting in the Moloi report — was not clear last night.

The board took both women to task for trying to “mislead” it, although it subsequently transpired that the inquiry had erred in some observations about Ngobeni’s appointment. It could not be established whether the action against Cele meant that Ngobeni and Mngwenya were also in trouble.

SA Police Service spokesperson Brigadier Lindela Mashigo said the police had not received the Moloi report and could therefore not comment on what likely action, if any, would be taken against Ngobeni.

“No one within SAPS has the report. It is still with the presidency and once we have received it, we will study it and determine if any action needs to be taken.”

Mashigo said he was aware of the media speculation about Cele’s dismissal, but could not comment. He too referred The Witness to the presidency.

The KZN ANC provincial executive committee (PEC) this week resolved that its top five officials should seek a meeting with Zuma, after allegations that non-ANC members were seen to have more protection than those who with Struggle credentials.

Among those mentioned were former communications minister Siphiwe Nyanda, former sports minister Makhenkesi Stofile and Cele himself. An ANC regional secretary confirmed the issue was discussed, but would not be drawn into giving more details. Nor would he say whether there would be a move by some in the KZN ANC to secure a political position for Cele.

He would only say that the PEC had discussed matters of national and provincial importance, and that the Cele issue was still “very sensitive to talk about”.

Speaking to The Witness on condition of anonymity, ANC KZN sources said Cele was on a “charm offensive” and had met councillors and senior branch members to “win over hearts and minds”.

His supporters said that while they believed he might have to keep a low profile for now, he would make a political comeback.