THE moral of the story: newspapers matter. In other words, this is a bit of a dinosaur of a movie.... 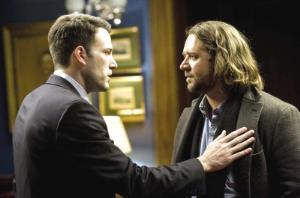 THE moral of the story: newspapers matter. In other words, this is a bit of a dinosaur of a movie.

There is more to it, of course. There’s intrigue in Washington. Isn’t there always? Clean-cut American values are under threat from a sinister private security corporation selling its services in conflict areas around the world. That’s bad enough, but what truly horrifies the honest side of the political establishment is that they are taking over the role of domestic security from the conventional police too. The man crusading against their perfidious activities is congressman Stephen Collins, played by Ben Affleck, as straight up an American guy as you could imagine complete with war record. But his world starts coming apart when a colleague, with whom he has been having an affair, winds up dead. His image in tatters, he calls up an old friend working as a reporter (Russell Crowe) on a newspaper struggling for its own survival in the face of new technology and more ruthless profit targets. The brave new world is represented by a blogger (read: uppity, opinionated, reckless, non-fact-checking gossipmonger), Della (Rachel MacAdams). She’s young and groomed, and inevitably at odds with Crowe’s character Cal, a Carl Bernstein type who’s scruffy, whose flat is masculine-chic (i.e. a mess) and whose car is that epitome of middle-class boringness, a Saab, only subverted into a past-its-prime rustbucket even messier than his flat. He doesn’t smoke, although he does keep a half-jack of whisky in the office, which is an archetype that died with the typewriter.

In spite of looking like a tramp, Cal is an ace investigative journalist, and he smells a rat. He tries hard not to trace the stink to his friend, and his boss (Helen Mirren) and others think his conflict of interest is leading him off the trail into fantastic conspiracy theories. He’s battling not only complex loyalties to his friend, but a sea change in the ethics of his trade in which celebrity news and noise from the blogosphere is threatening to make the values of good old-fashioned reporting redundant. In a sense this dynamic echoes the assault on values in the film’s main plot, where democracy, ethics and integrity are threatened by opportunism, corporate greed and corrupt politicians: the traditional targets of journalism.

In the end, blogger and hack find common cause, applying the stan­dard tests of truth to prove skullduggery on Capitol Hill. What a quaint thought.