NOW that he has intrigued medical experts with his theory that the tokoloshe could have its roots in the neurology of the human brain, Pietermaritzburg neurologist Dr Anand Moodley wants to delve further into this strange phenomenon.... 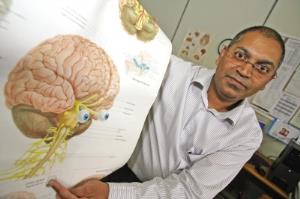 NOW that he has intrigued medical experts with his theory that the tokoloshe could have its roots in the neurology of the human brain, Pietermaritzburg neurologist Dr Anand Moodley wants to delve further into this strange phenomenon.

The next step is to consult sangomas and other traditional healers about his research.

The tokoloshe is reputedly a small humanoid with bulging eyes and a large head and is well-known and feared in the African culture as it can cause harm when under the influence of evil witches.

Moodley, who works at Grey’s Hospital, recently got medical experts talking with a letter in the South African Medical Journal on how the stimulation of the indusium griseum — a part of the human brain — could produce hallucinations of a small humanoid more commonly known as the African Tokoloshe.

Moodley said he has always been interested in the brain and its anatomy, especially the indusium griseum.

“I would certainly love to do research on the topic — especially studies involving EEG and neuro- imaging of patients who experience the tokoloshe on a regular basis.”

He said his next set is to research the subject on a larger scale and he hopes that he can secure the funding to carry out the extensive research.

“The aim of the research will be to either prove or disprove the theory that the indusium griseum is stimulated during the experience of a tokoloshe.”

However, one of the challenges facing Moodley is that the indusium griseum can only be imaged by magnetic resonance imaging (MRI) machines of a certain type.

“The indusium griseum can be imaged, but so far only by MRI machines of 3 Tesla and above. We have 1,5 Tesla machines in our country, so improved imaging protocols will need to be formulated. Functional imaging and EEG tests will also provide useful information,” he said.

While the letter has amused some of Moodley’s colleagues who feel that he is being controversial, it has also sparked interest in medical experts.

Some critics say a phenomenon like the tokoloshe can not be medically explained.

“I clearly stated in the letter that beliefs are what they are and should be left alone, but the theory proposed by [cognitive neuroscience researcher Dr Michael] Persinger does beg the question, could the tokoloshe be the experience of a stimulated indusium griseum?”

Moodley said that while science cannot explain all phenomena, it does not mean that people should just accept without questioning.

“When new evidence or paradigm shifts come to the fore even for spiritual or traditional phenomena then it should be our responsibility to investigate further with no disrespect to cultural beliefs.”

‘Beliefs are what they are and should be left alone … ’