Proteas can do the job

JOHANNESBURG — The South African cricket team were brimming with confidence yesterday just before they left for the ICC World Twenty20 in England, starting on June 5.... 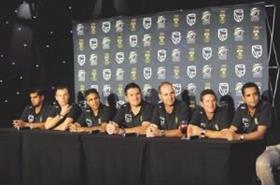 JOHANNESBURG — The South African cricket team were brimming with confidence yesterday just before they left for the ICC World Twenty20 in England, starting on June 5.

“We have a very competitive squad,” said coach Mickey Arthur.

“We now have a number of bowling options, we bat deep and our fielding gives us the competitive edge.

“We know it’s going to be hard work in England, but we also know what we’re going there for, and that is to win.”

Arthur said every match will be tough, although some will obviously be harder than others.

“Every team has its game-breakers, who can take the game away from the opposition, but I think our stiffest competition will come from India, who are the defending champions, and from Australia, who are always very competitive.”

He said it is unfortunate that the group South Africa will be in — if they qualify for the Super Eights — contains the strongest teams — Australia, India, England and South Africa — while the other group includes so-called weaker teams such as Bangladesh, Pakistan, Sri Lanka and New Zealand.

“But if we want to win the tournament, we have to play those teams anyway.

Hopefully we can knock one or two out in the Super Eight stage so we don’t have to play them in the semi-finals,” he laughed.

Captain Graeme Smith said the team is excited about the challenge facing them.

“We’ve had a fantastic couple of years, and last year was amazing — beating England in England and then Australia in Australia.

“Quite a few of us have been playing in the IPL and so we’ve got accustomed to playing this format of the game.

“The only problem might be mental fatigue, but we’ve talked about that, and the guys are really looking forward to going.”

In the 2009 World T20, South Africa were among the favourites to win the competition. They were unbeaten until their last Super Eight match when they lost to the ultimate winners, India, who knocked them out of the tournament.

The tournament begins on June 5 with a match between England and the Netherlands at Lords. South Africa’s first match is on June 7, when they play Scotland at the Oval in London.