DUBAI — Herschelle Gibbs is still welcome in the South African cricket team, but only if he is willing to sit down with every team member and have an open and honest chat.... 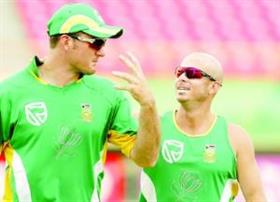 DUBAI — Herschelle Gibbs is still welcome in the South African cricket team, but only if he is willing to sit down with every team member and have an open and honest chat.

This is what Proteas captain Graeme Smith said on Monday after the launch of the former opening batsman’s controversial autobiography To the Point.

“I haven’t read the book yet, but I have to confess that the rest of the team and I are hurt by some of the things he says,” said Smith when asked for comment by Sport24.

“It is outrageous to allege that there is a culture of debauchery, because we would definitely not have been able to achieve so much success recently if we got falling-down drunk every couple of nights and partied in our hotel rooms with strange women until the early hours of the morning.”

“In every team there is usually a group of senior players who take the lead, just like in a successful business,” he said of the allegation that he, Jacques Kallis, Mark Boucher and AB de Villiers make all the decisions.

“If Herschelle ever felt left out, it’s a sign of his own insecurity. Someone like AB [De Villiers] is far more junior than him and should never have been a threat to him.”

According to Smith, despite everything, the team carried Gibbs “through the most difficult times of his life”.

“We were [the only people] he could count on for support during his messy divorce and his fight against alcohol abuse, and that’s why we don’t understand why he has turned against us like this now.”

“I have already sent him an SMS to find out why he did this. According to him, the media has blown it [out of proportion] and he would still like to stay friends,” said Smith.

Smith admits the book caused a flurry long before it appeared in shops on Monday.

“We were aware of it and it made a few of the guys nervous, but I’m not really surprised.”

“It corresponds with the way in which he lived his life — on the edge — but it’s sad that he’ll now be remembered for his antics,” said Smith.

“He was an excellent player, even though we all know that he should have achieved so much more with the talent that he has.”