Proteas on the up and up

SOUTH Africa did well to emerge unscathed from their trip to Dubai. To win both matches was a fine effort and a reward for the strategy of choosing a younger side with its own captain and motivation. That the newcomers played their parts was no surprise. For them it is the most important form of the... 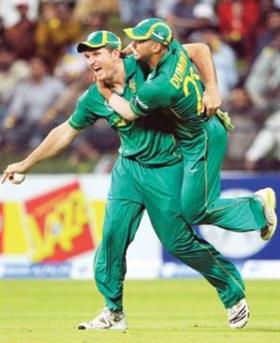 SOUTH Africa did well to emerge unscathed from their trip to Dubai. To win both matches was a fine effort and a reward for the strategy of choosing a younger side with its own captain and motivation. That the newcomers played their parts was no surprise. For them it is the most important form of the game. For those longer in the tooth it is a lucrative sideshow. As a rule victory goes to the hungry.

Doubtless the Proteas were also relieved to prevail because they stopped anyone saying they had thrown a match. Truly cricket has become a contentious game. At times the glorious exchanges between bat and ball get lost in the smoke. Alas, it is impossible to ignore bombs, match fixing, drug-taking and fights without sounding like one of those 1960s hippies with flowers in their hair.

Better than anything else, the Proteas’ last two engagements have reminded all and sundry that cricket is not surrounded by dainty old ladies serving cucumber sandwiches to deaf vicars. Nor is it played by quiet and neighbourly countries like Norway and Greenland, nations that always finish high in the lists of happy countries. Not that happiness is the aim. It’s vastly overrated and its pursuit causes endless misery.

Cricket is like the Balkans. Everyone is at each other’s throats. Pakistan reckoned that the recent match-fixing saga was a ruse dreamt up by the Indian secret service with the intent of discrediting them. Every country has its own troubles, too. Cricket has been saved by India, a bulging democracy, a booming economy, with a devotion to the game and a main religion that does not get bogged down in medievalism. However, India is also caught up in an orgy of consumerism. Apparently its middle class is going to grow tenfold to 550 million in the next 14 years. Now that is a market.

India’s growth means that cricket will survive economically. If the ICC continues to spread the game in Africa and the East, it might even surge. YouTube shows film of Japanese women playing capably and Papua New Guinea stalwarts singing a victory song. Whether the game will remain recognisable and worthwhile is another matter.

The Proteas’ opponents were a mixed bag. After a bright start the Zimbabweans fell away. The spin doctors have been hard at work arguing that Zimbabwe Cricket has been much maligned and that it was a victim of the strife, not part of it. Still, its leaders have accumulated vast wealth and have many mansions to their name. The current backlash against the opposition in that country is a trick. MDC may be backed by other democratic countries, but Zanu-PF is backed by tyrannies like China, Libya and Malaysia. Zimbabwe has plenty of money but it’s used for selfish purposes. Until recently the same was true of Zimbabwe Cricket.

Zimbabwe has some promising young players, nothing more. Many of them have already been given lots of opportunities without showing any obvious sign of breaking through. It will take years of hard work to build a strong enough player base to justify a return to Test cricket. That’s assuming Test cricket is still played by then, and still means anything. By 2020 the team might be ready. Perhaps the team will be entirely black, as happens in Tanzania. Nothing wrong with that. Equal opportunity is the aim, everywhere.

Pakistan also have a long road to travel. In their case ability is not the problem. Pakistan is blessed with an abundance of cricketing talent and is the sixth-largest nation in the world. Discipline has been the weak point. All too often it has been every man for himself. Unfortunately that has been the nature of the society. Every country depends to no small degree on its founder/leader. India and South Africa have been lucky; Zimbabwe and Pakistan have been undone. Jinnah died too soon after independence and the institutions were weak. Pakistan cricket remains at the whim of political forces.

At last Pakistan cricket is taking steps to confront its shadows. A working party has been set up. Someone with an acute sense of humour put Peter Chingoka of ZC in charge of it. India too is starting to take governance seriously and to that end has sacked the most dubious IPL franchises. The world is a battleground between the corrupt and the common man.

Much to its credit, South Africa is becoming one of the more stable forces in the game. Having faced so many challenges of its own, it is well placed to resolve those cropping up elsewhere. Luck has also played its part. The emergence of a diverse and vibrant middle order in the last few seasons has eased the pressure. Hashim Amla, JP Duminy and AB de Villiers can match the great middle order that has sustained India for the last 15 years. Did anyone think it might be possible to bring such a group together? Dare to dream.