THE chaos in Ghana surrounding what is turning out to be one of the best African Cup of Nations soccer tournaments on the field, but one of the poorest organised off it, has not left Bafana Bafana unaffected. 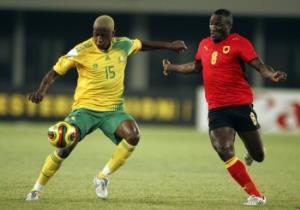 THE chaos in Ghana surrounding what is turning out to be one of the best African Cup of Nations soccer tournaments on the field, but one of the poorest organised off it, has not left Bafana Bafana unaffected.

By Monday’s training session, Bafana’s players were still to receive their tournament accreditation and were only expecting it yesterday, ahead of last night’s opening game against Angola at the Tamale Sports Stadium.

This follows the nightmare media accreditation collection process in Accra last week, a power failure that saw the stadium lights go out minutes prior to the Mali-Benin game in Sekondi, reported chaos in the stadiums’ press areas and criticism of the pitch at the venue of the final, the Ohene Djan stadium in Accra.

Safa’s head of delegation in Ghana, Mandla “Shoes” Mazibuko, said: “There is no synergy or co-operation between the Ghana LOC [Local Organising Committee] and Caf [the Confederation of African Football].”

South African journalists were shocked at the chaos involved when collecting their accreditation passes at the Kofi Annan International Conference Centre last week, where a lack of control and queues resulted in shouting, shoving and scuffles breaking out. Several journalists’ wallets were stolen.

Inspection of the press area in the Tamale Stadium suggests that only radio and television journalists will have work stations and power points.

But even the players have struggled to receive their accreditation. “We are battling the Ghana LOC,” Mazibuko said. “It is a pathetic situation, to say the least.”

The Safa official also revealed that South Africa’s decision to stay in a separate hotel from the other teams in Group D has turned out to be sensible. While Angola are also on their own, Tunisia and Senegal have booked into the same hotel, and tensions have been simmering.

“Tensions are rising at that hotel. A Senegal official punched one of the Tunisian reporters. And there is a lot of bad feeling between the teams. We anticipated something like that happening if the teams were together. I am pleased we avoided that mess,” Mazibuko said.