The almost forgotten Ilembe District on the north coast of the province will soon become a hive of tourism and economic activity thanks to a planned multi-billion rand development project. 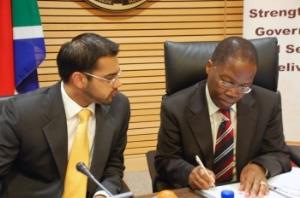 The almost forgotten Ilembe District on the north coast of the province will soon become a hive of tourism and economic activity thanks to a planned multi-billion rand development project.

The “city within a city” development north of uThukela is the result of what has been billed as the “largest direct investment project” in the continent by Dubai-based investors Ruwaad.

The real estate, hospitality and tourism investment and development company will be injecting over R20 billion towards the development, which is to be centred around an entertainment theme park, complemented by residential, retail and hospitality developments.

Members of the provincial cabinet and the heads of provincial government departments met Ruwaad executives yesterday and were briefed on the details of the development.

“All of us like what we have seen. This [development] is an important must-see project, which marks a new beginning for KwaZulu-Natal,” Premier S’bu Ndebele said after the meeting.

He added that not only will the development stimulate the KZN economy, but it is also an important project for South Africa.

Ndebele said the project will create another development node in addition to Richards Bay and Durban.

“If someone like King Shaka, who died in the 1800s, were to wake up he would find the area literally the same as he had left it,” he said.

The development, according to Ndebele, will create about 16 000 jobs. “This is by far the largest foreign direct investment the province has seen.”

Equally excited was the Ilembe District Mayor Welcome Mdabe, who said the investment is proof that the provincial government has confidence in the district municipality.

Hayan Merchant, the group chief executive officer of Ruwaad, said the investor has faith in KwaZulu-Natal, which “has shown a lot of potential”.

The parties would not say when the development is expected to start. “There are government processes that need to be followed. While we will be fast-tracking that process, we will not cut any corners,” said Local Government MEC Mike Mabuyakhulu.

The first phase of development is expected to be finished by 2012.