Have a path to your bed and painkillers at the ready — top tips for party time. 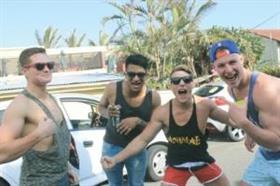 ROADWORKS did not discourage “ragers” from making their way to the beaches of Ballito for the matric Rage festivities.

Some people got out of their cars during standstill traffic to interact with each other.

With an expected 10 000 people partying as hard as they can, it is important for ragers to think about their safety.

While not everyone will be drinking, for those who will, it is important for them to have a plan of action in the event they have one too many.

Ayushi Sewraj, a rager, and her friends had custom dog tags made when they came for the matric rage.

They had their names and the hotel they were staying at printed on the tags in the event they got lost.

It is no secret that drinking makes co-ordination go out the window.

This may lead to injuries caused by falling or slamming into objects.

Although people may not remember how they got injured, they will feel the repercussions when they sober up.

Sewraj has tips on how to “drunk proof” your room prior to going out to avoid getting injuries: “Clear a path from the door to wherever your bed is so you don’t trip on anything. Have the covers out already so you can fall right into bed.

They say the best way to stay safe is to stick together.

“We are going to go out, have fun and make sure we stay together,” said Botha.

Scott said: “We are going to buy extra Rage Bones [a form of money at Rage] so that we have it available in the event we need to go back to [the parties] to fetch someone.”

Chris Schoeman and his friends are relying on the Red Frogs to keep them safe.

The Red Frogs are an organisation that takes care of people who have “partied a little too much”.

Schoemen, who was very excited to be at a Rage with his friends, said: “I would do matric again just for two weeks of Rage.”

His friend and party enthusiast Micheal Bower added: “There are no short cuts to anywhere.”

ACCORDING to the main security guard contracted by G&G Productions, the teenagers should insure their safety by:

• having a valid ticket for the day of the event — don’t come if you don’t have a ticket;

• having a form of identification with them at all times;

• not carrying any weapons such as firearms or any instruments that might endanger others;

• not drinking and driving;

• organising a shuttle if they plan on drinking;

• not leaving drinks unattended; and

• making sure they stay in groups.