JOEY Rasdien’s endearing stage persona and a comedic style, which relies on the intellectually absurd and physically hysterical, have made him one of the country’s most popular stand-up comedians.... 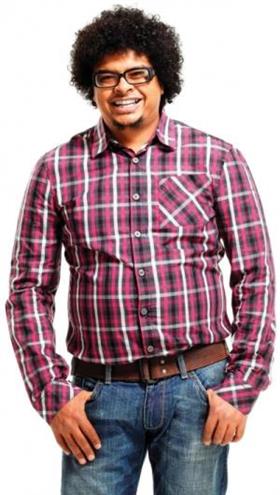 JOEY Rasdien’s endearing stage persona and a comedic style, which relies on the intellectually absurd and physically hysterical, have made him one of the country’s most popular stand-up comedians.

Now fans can see him in their living rooms in his latest venture, the situation comedy Rasdien, which is being screened on SABC2 on Friday nights at 6 pm, starting on November 5. The comedian plays the title character, Ben Rasdien, a man who needs to grow up. He has a son, Zach, a successful career, and a fancy house, and his manager, Mannie (Mortimer Williams) — who is also his brother — knows that Ben’s crazy mind is cash in their pockets.

Meanwhile, Zach (Tyron Lamprecht) would much rather his 30-year-old dad stopped acting like kid and more like a father.

Also starring in the comedy is Isidingo’s Kim Cloete, who plays Alice, Ben’s assistant, and helps him to paper over the cracks in his parenting — when they’re not at each other’s throats, that is.

It’s not the first time that Ras­dien has been on the small screen.

He previously hosted his own show Go For It on SABC2, and was a scriptwriter and performer on SABC1’s The Pure Monate Show.

This time round he’s happy to take credit for the concept, but didn’t put pen to paper when it came to scripting the series.

“I only conceptualised it — the main writer is Greig Coetzee [of White Men With Weapons fame]. He’s one of the best writers we have in South Africa. What Greig brings to the table is an ability to make my ideas into something concrete,” Rasdien said.

“I had a story to tell — it’s not biographical or anything, but I have taken things from my personal experience. Rasdien is about the adult in every child and the child in every adult and the wisdom that we can learn from children.”

Rasdien says his new DVD, Mixed DNA, will be available in stores in December.