THE jibes are likely to slip into history and Michaelhouse, in their 114th year, could this evening finally have their first rugby Springbok in Patrick Lambie.... 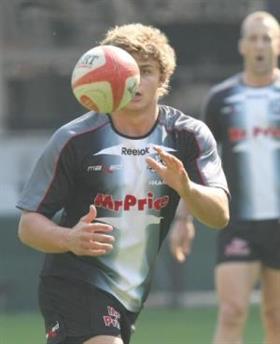 THE jibes are likely to slip into history and Michaelhouse, in their 114th year, could this evening finally have their first rugby Springbok in Patrick Lambie.

The young Sharks flyhalf, who turned 20 earlier this month and is in the national training squad, is likely to be one of the half-dozen young players included in the Springbok squad that will be named later tonight for the grand slam tour of the United Kingdom.

Sharks captain Stefan Terblanche is confident he will be.

“If he is not Michaelhouse’s first Springbok, they will have to wait another 100 years,” he said.

But first Lambie has to play a pivotal role in helping the Sharks win the Currie Cup title for the second time in three years when they face Western Province in the final at King’s Park this evening.

Lambie has enjoyed a fairytale season, making his Sharks’ Super 14 debut as a 19-year-old seven months ago — as a fullback — and then moving via inside centre to flyhalf in the Currie Cup.

“He is an old head on young shoulders,” says coach John Plumtree.

Certainly Lambie’s vision and distributing skills were tailor-made for the modern and ambitious game plan which Plumtree wanted to pursue in the Currie Cup.

Lambie will be under pressure this evening as the highly effective Western Province backrow of Schalk Burger, Francois Louw and Duane Vermeulen attempt to rattle him and spoil the smooth service he offers to his outside backs.

And he will certainly have to show that he can vary his play by making judicious use of the boot and not just running with the ball willy-nilly. Knowing when to kick or when to pass will come to Lambie with time, but Province will be hoping to expose his lack of experience tonight.

Lambie certainly has the genes and the pedigree. Father Ian played for Natal at outside threequarter while grandad Nic ­Labuschagne was an England and Natal hooker and was later president of the Natal Rugby Union.

Plumtree has worked closely with the family in carefully plotting Pat Lambie’s career, and the Sharks coach paid tribute to them at a crowded banquet at Sibaya on Thursday night.

“I would like to thank Ian and Caz Lambie for what they did for Sharks rugby 20 years ago,” he said.

The occasion was the 20th anniversary of Natal’s first Currie Cup win over the Blue Bulls at Loftus in October 1990.

And for those who believe that might be an omen, Pat Lambie was born 11 days after the Loftus win; Plumtree played for Natal that day and the Bulls — just as Province did this year — easily beat the Sharks a fortnight before the Currie Cup. final.