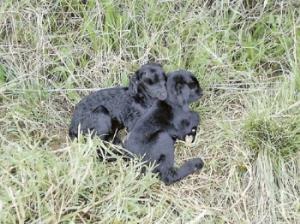 EMERGING goat farmers will be exhibiting their best animals for the first time at the 2008 Royal Agricultural Show today.

But the competition is not a once-off — the organisers hope that, in future, the RAS Small Stock Expo will serve as the championship event of a series of goat shows held at rural and district shows throughout the province.

In a statement Rikki Abbott, of the Department of Agriculture and Environmental Affairs, said the RAS Small Stock Expo is important because of the unique position that goats hold in Zulu culture and tradition and because they are an increasingly important livestock type.

“To many people not directly involved in the rapidly changing reality of agriculture in KwaZulu-Natal, goats are seen as a second–rate commodity, whereas in reality goats have already become an increasingly important role-player in agricultural production in this province,” he added.

“Goats already are one of the most important farm animals for the resource-poor, providing their owners with products such as meat, leather, manure and milk. They can easily be sold to provide cash and are very valuable for cultural and sociological reasons.

“In addition, an increasing number of commercial farmers are now running, or looking to include, a goat herd in their farming enterprises.”

Commenting on goat production in the province, Abbott said indigenous goats are more adapted to harsh environmental and management conditions than Boergoats. For example, they are genetically more resistant to Heartwater, a tick-borne disease, which is problematic in many parts of KwaZulu-Natal.

And as far as the small-scale farmer is concerned, small stock — and sheep and goats in particular — have the potential to provide a livelihood and contribute significantly to the demand for animal protein in developing areas, because:

• they are able to use roughage feeds and crop residues which are unsuitable for human consumption or for pig and poultry-production;

• they have a short gestation period and are relatively highly productive, even on low-quality feed;

• the response to the introduction of improved genetic material to the herd will be relatively rapid;

• although goats are primarily browsers (and best suited to the bushveld areas of the province) they are so adaptable that they can also flourish on grassland with very little browse; and

• they are able to utilise poor quality forages and can adapt to a variety of management systems such as controlling invasive vegetation around homesteads, in farmlands and along roads.