Rugby in her blood

WITH a father who coaches rugby and two brothers who played the game, it’s no wonder Tayla Kinsey (20) decided that if she couldn’t beat them, she had to join ... 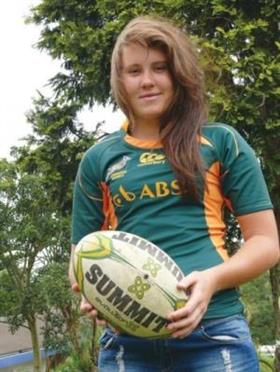 WITH a father who coaches rugby and two brothers who played the game, it’s no wonder Tayla Kinsey (20) decided that if she couldn’t beat them, she had to join them.

A former Hillcrest High School pupil, Kinsey has made steady progress up the rugby ladder, culminating in her making her Springbok debut earlier this year.

“I started playing junior rugby at club level when I was seven,” said Kinsey. “It was mini rugby and we played barefoot. My brothers Trent and Blake played and I was always watching. One day, I decided to join in and found I rather liked it.”

Kinsey was the only girl playing at club level and it took a little time for her to settle in the ranks. “Boys from other clubs were surprised to see a girl playing and at first, they backed off, unsure of how to deal with me on the field,” she said. “I got stuck in and once I had tackled a few of them, then they gave it back to me. I earned their respect.”

Kinsey’s mother, Judy, had her own battles off the field. Many people criticising her for letting her daughter play the rough and tumble game. “I took plenty of flak from other mothers who were shocked I could allow my daughter to play rugby,” she said. “I shrugged my shoulders and said it was what she wanted to do and I had to just let it go.”

Kinsey stopped playing club rugby at age 10, “Because I was not allowed to move up to the next level.” However, at high school she played soccer, hockey and touch rugby, achieving KZN honours for touch and hockey.

“In my first year at Hillcrest High School I was instrumental in getting a girls’ touch rugby side together,” said Kinsey. “From Grade 10 to 12 I played in the side, making the KZN U19 side when I was in matric.”

At the resulting interprovincial tournament, Kinsey’s skill at rugby was spotted by a scout who invited her to give full 15-player rugby a try at Rovers.

“I had no ambition to pursue rugby and went along to give it a bash. I loved it and was selected for the KZN trials last year, making the KZN team,” she said.

In December last year, Kinsey was instructed to attend a South African U20 training camp in Cape Town, subsequently making the SA side for the Nations Cup in England, in July this year.

“These camps are held once a month, from January to June, over four days and are quite intense. I have to perform or I am out of the mix,” said Kinsey.

In England, the SA team beat the hosts but lost to Canada and the US. “It was a two-week tour and the highlight was beating England, although we played them again and lost.”

In August this year, Kinsey was on the bench for a World Cup qualifier clash against Uganda, played in the Boland. South Africa won and qualified for the IRB Women’s World Cup in Paris in July next year.

“That was probably my most nervous moment, coming off the bench in such an important match and just hoping I would perform and see the team qualify,” said Kinsey. “It was unbelievable to qualify and my immediate goal is to be in the squad that goes to the World Cup.”

The four-day camp cycle starts again on January 16 next year and Kinsey is determined to rise to the occasion.

“I always have a fear of not performing, of letting the team down. The physical nature of rugby does not worry me and it’s always more of a mental challenge for me,” she said.

Kinsey currently turns out at flyhalf or scrumhalf at club level for Hillcrest Villagers, but scrumhalf is her Springbok position.

“We have the same treatment as the men. Our games are physical and we play for 80 minutes,” said Kinsey. “I have been fortunate in not picking up any serious injury and to be honest, I am not scared of getting hurt. It comes with the game.

“Ironically, my most serious injury was off the field, when I was six. I broke my hip when I was pushed off the roof.”

Fitness is a vital ingredient of Kinsey’s rugby life. “If my fitness is poor, then so is my game,” she said. “At provincial level, we train twice a week with a match on Saturday. In the Springbok side, because we are all scattered around the country, we are given a training programme to follow, which involves gym work with running and strength training.

“We get tested at the camps and must reach certain standards.”

Kinsey is aware that running out for South Africa at next year’s World Cup will take some hard work. “Everything involves taking steps to reach where you want to be and the first step is the camp in January. That is my starting point in making the World Cup side. It’s one day at a time with the prize at the end,” she said.

Life after rugby is still a bit of a distant thought for Kinsey as she went straight into the sport after school.

“I don’t want studies to get in the way of my rugby right now. Many players have to forfeit camps and selection because of this, and I am not keen to have any regrets,” she said. “If I had to study it would probably be sports science.”