A victory over Senegal in their final Group D match of the African Nations Cup at the Baba Yara Sports Stadium here this evening may or may not be enough for Bafana Bafana to reach the quarter-finals, but it would provide a huge confidence booster to Carlos Alberto Parreira’s young team. 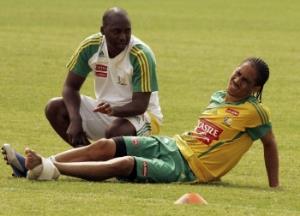 A victory over Senegal in their final Group D match of the African Nations Cup at the Baba Yara Sports Stadium here this evening may or may not be enough for Bafana Bafana to reach the quarter-finals, but it would provide a huge confidence booster to Carlos Alberto Parreira’s young team.

South Africa need Tunisia and Angola to not play to a draw in the concurrent final Group D game in Tamale, and then to beat Senegal by two, three, or perhaps even four goals, depending on the other teams’ scoreline.

Parreira took a gamble by throwing his youngsters into this Nations Cup and, overall, the coach’s decision should in the long term be proved right. Some of the inexperienced players have looked overawed, but that should have been expected.

Even a first-round exit giving precious game time under the lights and glare of a Nations Cup — with its TV cameras, hordes of press photographers, global audience and media following — can only benefit players like Teko Modise, Bryce Moon, Tsepo Masilela, Lerato Chabangu and Terror Fanteni. They performed to varying degrees of success, but will all surely improve the next time.

There is still the Confederations Cup in 2009 and Afcon in Angola in 2010 for Bafana to prove themselves more competitive on the global stage. And going out in the group stages with veterans such as Bradley Carnell, Macbeth Sibaya and Delron Buckley in the team would have benefited no one, and Bafana would not have moved forward in the bigger 2010 picture.

Parreira said yesterday that hopes remain high for South Africa, despite their demoralising defeat against Tunisia.

“The spirit is good. Of course after the game against Tunisia, people were not happy because a draw would at least have given us a huge opportunity to go through to the quarter-finals … Because we lost we must now depend on the result between Tunisia and Angola.

“But it is possible to go through. Yesterday Ivory Coast and Nigeria showed that it can happen. So it is important for us to play with a winning spirit — not only because we want to qualify, but also to give a big improvement from these new young boys, to leave in a good position.”

Bafana’s disturbing tendency to play decent football but concede goals through horrendous mistakes in the defence and midfield, which was displayed in a 3-1 Afcon qualifying defeat against Zambia in September, was repeated against Tunisia.

“It has happened twice in 15 games and it has cost us a high price,” Parreira said of the problem. “We lost the game against Zambia, which cost us the first position in the group.

“And against Tunisia it cost us the game again because when we were 1-0 down, until the 33rd minute we were pressing, creating shots and opportunities and on the edge of scoring a goal. And then two mistakes come and, of course, it was a big shower at 3-0 down at half time.”

South Africa will take heart that they tend not to produce such performances twice in a row. That does not mean, however, that a Senegal team in disarray after a 3-1 defeat of their own against Angola, and the subsequent resignation of coach Henri Kasperczak, will be any easy touch.

The presence of their two monstrous players in midfield — Portsmouth’s Papa Bouba Diop and the highly impressive, dreadlocked Moustapha Bayal Sall — will give Bafana’s physically inferior middle men much to think about. Star forward El Hadji Diouf has been out of form, but owes his team a big performance. Wingers Frederic Mendy and Diomansy Kamara can be a handful.

Unusually, Parreira opted not to play a clearly defined first and second team at his training yesterday, and the nature of his line-up is hard to predict. The coach was not pleased with the results of a 4-4-2 system against Tunisia, and might opt to bring Surprise Moriri back in a shadow role to Sibusiso Zuma.

Steven Pienaar’s potential injury might finally see Lance Davids given a chance somewhere, whether at right-back, right midfield or playmaker.

Coverage on SATV1 and SS3.