Bafana: Shakiness under pressure has resulted in mistakes 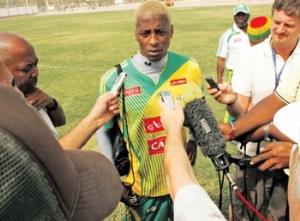 BAFANA Bafana need to take a more attacking approach if they are to achieve the victory they need in their final African Nations Cup Group D game against Senegal in Kumasi tomorrow, says veteran striker Sibusiso Zuma.

South Africa have taken on bigger, more physical opponents at the Nations Cup with quick-passing possession football. This worked to an extent in their 1-1 draw against skillful Angola in their Group D opener, but was not as effective in the 3-1 defeat against well-organised Tunisia on Sunday. And Arminia Bielefeld striker Zuma believes Bafana need to utilise their possession better, and play a more attacking game, if they are to beat Senegal.

A complicated set of permutations means South Africa need a win by two or three goals, and for Tunisia and Angola to have a result either way, to progress to the quarter-finals.

Zuma said Bafana need to be more attacking against Senegal, who are reported to be in a state of disunity, and whose coach, Henri Kasperczak, quit after the team’s 3-1 defeat against Angola on Sunday. The South Africans will have to rebuild their confidence after a demoralising defeat against an impressive Tunisia, who capitalised on some poor defending by Bafana.

“For now the focus is on training and winning the game [against Senegal],” Zuma said after a practise session at an outer field at Tamale Sports Stadium yesterday. “The good thing is there is a lot of improvement in the team. We look good when we have the ball, but then we make mistakes.

“We can’t win the games with possession. I still believe we can try and penetrate more and try and create more chances. That is the plan at the moment, to try and get into the box more, and hopefully we can get the goals.”

Zuma, Bafana’s main source of goals scored and created in recent times, has looked off the pace at the tournament, and will hope to improve against Senegal. He said of his form: “It has been up and down. I think I can still offer more.

Zuma added: “At this level of football if you make mistakes you get punished. And that is what happened against Tunisia, where it was going to be difficult to come back. But I’m happy with the fighting spirit. We just need to keep going and win the next match.”

Bafana, in the past, have been criticised for a lack of commitment, but that has not been the case here in Ghana.

Rather, nervousness and a shakiness under pressure that has been a feature of the team over the past year, resulted in the critical mistakes against Tunisia.

But the team have played some good football in patches, particularly in the 1-1 opening draw against Angola, in what Zuma describes as one of the best Nations Cup tournaments he has competed in.

“This is one of the best Afcons I have been to,” said the striker, who has played in four Nations Cups. “The level and pace of the games, the goals, and the technique are all good. All the teams are working very hard, and that’s the most difficult part, because even the small teams are competitive.

“We are ready to work as well. I’m just hoping that the guys show the same spirit they have shown, and play good football … and create more chances.”

Playmaker Teko Modise sat out Bafana’s training session yesterday with a knock to the groin, along with left-back Tsepo Masilela, who pulled up with a hamstring injury against Tunisia. Modise said he expects to be fit for Senegal, while Masilela is doubtful.