HELP is on the way for Anton Madlala. ... 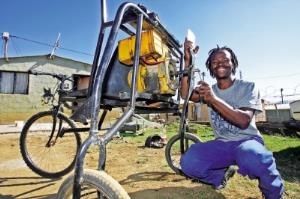 HELP is on the way for Anton Madlala.

The creative Mpophomeni man, who built his own motorised bicycle after his car was impounded for not being roadworthy, has been offered assistance to make his bicycle safer.

Madlala was pictured in The Witness on Tuesday with his bicycle.

Since then, people who admire his creativity have offered help to improve the safety features on the bicycle.

Madlala said that after his car was impounded, he and his family faced starvation as the car was their source of income.

So he rebuilt the bicycle with three wheels, a lawnmower engine and a wooden propeller. That allowed him to do his work and to continue supporting his family.

Bill Rosenberg, a Cape Town resident who works for an aluminium company, has offered Madlala his help to make the bicycle safer.

He said he will build an aluminium guard to be mounted over the propeller to make it safer.

“It’s just possible that a child could lose a hand or an arm if they put their hands in there.

“And even Madlala could get seriously injured were he to fall.”

“To have an exposed propeller is illegal and before the police tell him to stop using his bicycle, I could assist him to mount an aluminium guard and make it safer,” Rosenberg said.

The Witness has put the men in touch with each other so that the measurements for the propeller guard can be passed on.