OVER 100 people from around Durban braved the cold and rain to attend the late Nelson Mandela’s memorial prayer at Ohlange High School yesterday... 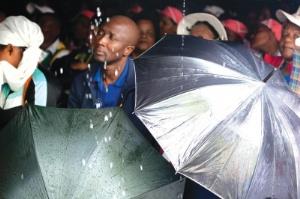 OVER 100 people from around Durban braved the cold and rain to attend the late Nelson Mandela’s memorial prayer at Ohlange High School yesterday.

This is where Madiba cast his vote during the first democratic elections in 1994. ANC provincial and regional leadership, Sharks players, Ladysmith Black Mambazo and eThekwini Mayor James Nxumalo attended the prayer.

Among them was the U.S. consular-general in the SA Embassy Taylor Ruggles.

Nxumalo said of the 10 million voters who voted in 1994, Madiba was the very first to cast his in the whole country.

“Sunday will be the day we will be closing the chapter of this gentle giant who sacrificed his life and family for all. It will take generations and generations to have a leader of his calibre,” said Nxumalo. He said to emulate Madiba everyone, irrespective of political affiliation, needed to work on the issue of unemployment and poverty.

Ohlange principal Siyanda Nxumalo said plans were in place to revamp the school and keep it’s history intact for the benefit of generations to come.

“We’re always in awe whenever we look at the condition of the school given that it’s where the ANC was conceived.

“Albert Luthuli taught here, Phumzile Mlambo-Ngcuka studied and taught at the school. Thoko Didiza, Lindiwe Hendricks, Debora Fraiser and many other leaders who now occupy top positions in government and private sector are the product of this school.

“This school is a symbol that greatness is achieved, and this is where these leaders achieved theirs. It can be a great disservice if the youth of today can lose out from the great history this school forms,” he said.