PERHAPS it is because of our insular past that as South Africans we tend to view the world in one way or the other. Right or wrong, winners or losers, black or white —  there are seldom shades of grey.... 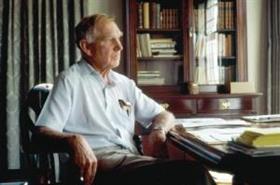 PERHAPS it is because of our insular past that as South Africans we tend to view the world in one way or the other. Right or wrong, winners or losers, black or white —  there are seldom shades of grey.

Historian Michael Cardo’s biography of highly respected liberal Peter Brown is about these shades of grey. In charting Brown’s political journey, Cardo brings to the fore the nuanced and multifaceted nature of South Africa’s liberation struggle.

Liberals and liberalism are not popular terms in the current body politic. Liberals are most often seen as misguided conservatives.

Cardo shows that his subject cannot be so lightly dismissed. Brown’s contribution to South Africa’s freedom was unique and generous. He was a champion of non-racialism and above all he worked in a difficult and neglected terrain — among the rural poor.

The book serves as a reminder of the poverty of the practice of labelling and stereotyping people. Liberals are not a monolithic bunch. There are a range of views held within the liberal tradition.

Brown’s close friend Alan Paton once described liberalism. He said it is not a creed of this or any century. “It is a generosity of spirit, a tolerance of others, an understanding of otherness, a commitment to the rule of law, an abhorrence of authoritarianism, a love of freedom.”

Cardo shows that Brown remained true to these values. In fact he was remarkably tolerant, so much so that as a reader you question why he did not react more boldly in certain situations. By the end of the book you get the measure of the man — it was just not his style.

As Cardo says in the blurb of the book, Brown lived his life according to the tenet espoused by 19th-century Russian liberal thinker, Aleksandr Herzen, who said: “We have to open men’s eyes not tear them out.” Hence the title of the book: Opening Men’s Eyes: Peter Brown & the Liberal Struggle for South Africa.

This was why Brown managed to hold on to friendships across the political spectrum. His circle of acquaintances included both IFP leader Mangosuthu Buthelezi and ANC firebrand Harry Gwala.

Between 1977 and 1985 he regularly visited Winnie Mandela when she was banished to the Free State town of Brandfort. She wrote and thanked him for making her days more bearable. “You will probably never guess just how much your visits meant to me. On each occasion it was as if I had a new lease on life and I was able to face each lonely day ahead courageously.”

The biography will be of interest in Pietermaritzburg, Brown’s home town. Brown was a larger than life figure in the KwaZulu-Natal landscape. Growing up in Pietermaritzburg, I got to know about him as a child. A neighbour in Berg Street, Rajen Naidoo, joined the Liberal Party and soon recruited half the neighbourhood as members, including the Meeran brothers, their cousins and friends. Naidoo was such a big fan of Brown’s, forever spouting his mentor’s words, that in the neighbourhood he soon became known as Rajen Brown.

Brown was born to a life of wealth and privilege, and was something of an enigma in his social circle. He was a farmer and polo player with a social conscience. The seeds of his activism were planted while he was still a schoolboy at Michaelhouse, when he went on a student exchange visit to a black school, Adams College.

A turning point in his life was when he was studying at Cambridge and attended a talk by coloured author Peter Abrahams, who spoke on the colour bar back home.

Brown wrote to his mother saying: “It was a revelation of our own blindness and it decided me”. He returned to South Africa and went to study at the University of Cape Town. He married Phoebe Barlow, daughter of entrepreneur Punch Barlow and settled in Pietermaritzburg. He worked in Edendale and helped establish the famous YMCA there. This was a centre of arts, music, drama learning and sport. The YMCA often features in the stories of prominent people of Edendale as a place where they nurtured their talents and acquired their skills. Edendale was where he forged close friendships with Selby Msimang and Sam Chetty.

Brown went on to become a founder member of the Liberal Party and built up a reputation for his membership recruitment drive and for opening up branches of the party in black communities across the province. He was imprisoned during the sixties state of emergency and served two consecutive banning orders. Yet, his greatest contribution was still to come. This was in his quiet assistance to and support of the families of political prisoners and detainees. Later he founded the Association for Rural Advancement (Afra) and was involved in development work with African farmers.

Brown would have approved of Cardo’s biography. Not that he would have expected a book on his life. By all accounts he was a modest man. His appreciation would be that in telling his story, Cardo presents a cadenced and considered look at the Liberal Party. This is a book that adds to the documented history of South Africa. It also contributes to the scholarship of liberalism, a political value system often misunderstood both in how it is viewed and sometimes practised.

Opening Men’s Eyes: Peter Brown & the Liberal Struggle for South Africa, published by Jonathan Ball, is being launchedtoday at the Alan Paton Centre and Struggle Archives at the University of KwaZulu-Natal. The author, Michael Cardo, also has KZN roots. He was born in Durban and studied at UKZN. He is a historian with a PhD from Cambridge University. Cardo worked for the Democratic Alliance as a researcher and as Helen Zille’s speech writer. Between 2006 and 2008 he was a visiting research fellow at the Helen Suzman Foundation while he researched and wrote this biography, which is his first book.