THE Sharks were richly rewarded, both financially and in terms of Springbok selection, for their remarkable efforts in regaining the Currie Cup title at King’s Park on Saturday night.... 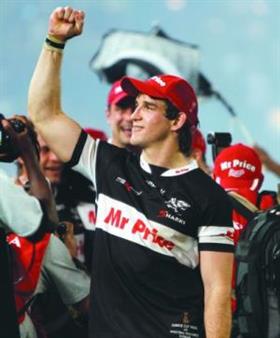 THE Sharks were richly rewarded, both financially and in terms of Springbok selection, for their remarkable efforts in regaining the Currie Cup title at King’s Park on Saturday night.

The Sharks players received lucrative bonuses, first for reaching the final — and providing their bosses with a capacity crowd of nearly 54 000 on Saturday evening — and then for overcoming Western Province and taking the title.

Moments after the final, it was learnt that the Sharks would have more players (nine) than any other province in the Springbok squad to tour the United Kingdom on a Grand Slam tour.

A 10th was added to the squad yesterday with centre Adi Jacobs on stand-by for the injured Juan de Jongh (ankle) and Jean de Villiers (groin). The Blue Bulls have players in the squad.

The selection of Jacobs will be viewed with some surprise and underlines the worrying shortage of quality outside centres. The chunky centre has played less than a quarter of rugby after returning from a six-month lay-off and he was not even on the Sharks bench for Saturday’s final.

There will be no quibbles with other Sharks selected to the squad. Seven of the pack who did duty on Saturday were selected — lock Steve Sykes was the only forward overlooked — while four of the six new Springbok caps are from the Sharks.

Plumtree said he expected Lambie to be chosen after his excellent season, but was delighted that Daniel had also been selected from outside the Bok training group.

“When Keegan Daniel was left out of the original Bok training group I was horrified. Telling him [on Saturday night] that he was a Springbok was probably one of the most pleasurable things I have done.”

The two other new caps in the side are SA U20 flyhalf Elton Jantjies and Cheetahs loosehead prop Coenie Oosthuizen.

Coach Peter de Villiers also included two overseas-based players — both former Sharks — in fullback or centre Frans Steyn, who will only join the squad after Saturday’s Test against Ireland, and Ulster’s Ruan Pienaar.

Ricky Januarie, the WP scrumhalf, has withdrawn from the original 30-man squad with injury, but Pienaar will provide back-up at the base of the scrum for Francois Hougaard.

“We’ve rewarded players for their form in what was a difficult selection,” said De Villiers.

“It’s a new-look squad, but it has a good backbone of experience for what is going to be a challenging tour.”

Two other Bulls players, fullback Zane Kirchner and veteran forward Danie Rossouw, were overlooked. De Villiers said that Rossouw needs a break and now has the chance to work on his conditioning ahead of next season.

Wrecking-ball Alberts, who weighs close to 120 kg, was delighted with his selection.

“It’s an amazing feeling and it all hasn’t sunk in yet, winning the Currie Cup and becoming a Bok on the same day,” said the 26-year-old, who moved to Durban from Johannesburg this season.

“It’s been a long process for me, but I wouldn’t be in the team without my team-mates at the Sharks.

“I’ve loved my first season in Durban. I’m lucky to be part of a winning team, with great coaches and great players.”

Alberts, used at flank, number eight and lock by Plumtree, certainly could do some damage in the heavy going up north.

The Springboks’ fixtures are: