VICTORY could not possibly have been sweeter for coach John Plumtree and the Sharks as they overcame fancied Western Province 30-10 at King’s Park on Saturday night to take the Currie Cup title for the second time in three years.... 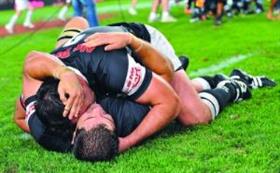 VICTORY could not possibly have been sweeter for coach John Plumtree and the Sharks as they overcame fancied Western Province 30-10 at King’s Park on Saturday night to take the Currie Cup title for the second time in three years.

The Sharks had to do it the hard way by beating both this year’s Super 14 finalists in the play-offs and Plumtree was particularly chuffed with that.

“That was a great win,” he said, “beating the two top teams in the Super 14 to win the Currie Cup. That achievement cannot be over-rated and I’m so proud of the team.”

The Sharks, with their aggressive defence and pace in open spaces, kept Province under pressure, taking their scoring chances in the first half and then denying the Cape Town team with tackle after tackle in the second.

Plumtree said that finishing top of the log, and securing home advantage against first the Blue Bulls in the semi-final and then Province in the final, was critical.

“You could see how we played off the crowd’s energy in both games. I’m just delighted we could get this win for them.

“We do not have the flashiest of teams with the big stars and nobody gave us a chance with all the so-called experts writing us off. That galvanised us and the crowd getting behind us really helped when we had to defend for long periods in the second half.”

Captain Stefan Terblanche agreed that it helped being written off by “ex-coaches and certain bank managers”.

“But there was also motivation in the squad and a team like this, playing together, will always beat talented individuals,” an emotional Terblanche said.

Both Plumtree and Terblanche were reluctant to single out individuals but, inevitably, the name of Pat Lambie cropped up.

“Paddy was huge,” said Plumtree of his flyhalf who was named man of the match and scored 25 points.

“He has grown unbelievably this season and has quickly become a man.”

Lambie, who showed he has the skill and temperament to play at the highest level, and scrumhalf Charl McLeod, until he was injured and replaced by Rory Kockott at half-time, both also kicked accurately and intelligently out of hand as they brought greater balance to the Sharks’ game.

But Plumtree emphasised the team effort that had fashioned the win.

“We know we can attack but the character of the team showed in defence and everyone played a part.”

Terblanche paid tribute to the hard-tackling inside centre Andries Strauss, who was playing his last game for the Sharks before returning to Bloemfontein.

“He has been immense this season and he has been a team man through and through. He knew it was his last game for us and he put his body on the line.”

Terblanche said that Strauss had spoken in the team huddle and asked his team-mates to imagine how they would play if they knew it was their last game for the Sharks.

“That really lifted the guys.”

Both Western Province coach Allister Coetzee and captain Schalk Burger were generous in defeat and agreed that the Sharks had “outplayed” their team.

“We are disappointed in the way we played but credit to the Sharks,” said Coetzee. “They took their chances and played very well. They deserve to be champions.”

Coetzee said his players had made far too many errors and had not kept the ball — “and you can’t do that in a final”.

“The Sharks’ execution was the key and they beat us at the breakdown,” said Coetzee.

He said that the contest had been exceptionally tough — “that was of Test match standard” — but the Sharks had created momentum. Springbok hooker Bismarck du Plessis was a major force at the breakdown, forcing a number of turnovers.

Burger agreed and, felled in a devastating tackle by the 120 kg Willem Alberts, he could personally vouch for the physicality of the battle.

“But the Sharks were much better than us.”

He admitted that not kicking the many penalties at the posts looked bad in hindsight.

“But we were chasing the game and we didn’t know we were going to get so many kicking chances later.”

Terblanche said he understood why Burger had opted to set up attacking lineouts.

“I didn’t think it was wrong because it worked for them in the first half and we were under the pump. But we stood up well together in defence and weathered the storm which gave us a real lift.”

It was a stunning display in front of their enthusiastic supporters and one which should, finally, convince the rest of South Africa that the Sharks do indeed have a team … and a coach.