SPRINGBOK national selector Ian McIntosh has been surprised by the quality and style of the rugby played by the British Lions on their tour of South Africa, and Sharks coach John Plumtree and captain Johann Muller echo his view.... 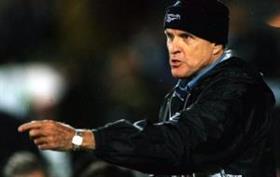 SPRINGBOK national selector Ian McIntosh has been surprised by the quality and style of the rugby played by the British Lions on their tour of South Africa, and Sharks coach John Plumtree and captain Johann Muller echo his view.

McIntosh, a former Sharks and Springbok coach and now one of three national selectors, described the British Lions as being “very formidable”.

“There are two features of strong rugby teams – an ability to attack space when in possession and then deny space when the opponents have the ball. The Lions have mastered both those areas of the game and they are highly effective.”

McIntosh told Weekend Witness that the Lions have changed their style of rugby, becoming far more direct and physical in their approach, and he has been impressed with the changes.

“They do all the basics really well, at the scrum, the line-out and the breakdown, their defence is organised and they attack the gainline. They are going to be a real test for the Springboks, but we do have an experienced and streetwise team and I’m confident we will be up for the challenge.”

Plumtree, who coached Wellington against the 2005 British Lions in New Zealand, said the current Lions are “much, much better.”

“This is a very different Lions side and it starts with the clever way they are managed and organised. The players don’t know who is in the Test team and this makes for healthy competition in the squad. It brings out the best in the players and lifts the whole squad’s level of performance.”

Plumtree said that probably 11 of the starting line-up against the Sharks (on Wednesday night) would be in the Test side, but the other players will still hope they have a chance.

“Everyone in the Lions squad appears to be unified in their purpose, which wasn’t the case in New Zealand in 2005.”

The Sharks coach said the Boks would have to prepare “smartly” for the Test. “The Lions put us [the Sharks] under huge pressure and we just never had the chance to attack them. What little ball we did win, we kicked away and that is the result of playing under pressure; you just try and relieve it by kicking but all that does is hand the ball back to them.”

British journalists were dismayed that the referee had penalised the Lions’ front-row for collapsing the scrum on a number of occasions.

“Why was the team with the stronger scrum being penalised?” one writer asked Ian McGeechan.

The Lions coach said it was a question of communication with the referee and said they had spoken to Jonathan Kaplan at half-time and this had resulted in a change of attitude in the second half and a number of free-kicks being awarded against the Sharks.

“You have to be able to adapt to what the referee wants and that is all about communication,” said McGeechan.

“The Lions will have problems in the Test because they simply collapse the scrum when they don’t get the hit [the right contact on engagement]. They are like the Waratahs and they just go to ground if their scrum is not right. Bryce Lawrence [the New Zealand referee in the first Test] will be hard on that and it will be interesting to see how that part of the game goes in the first Test.”

The Sharks coach said the Test in Durban would be critical to the series, and the losing team would be under enormous pressure to win the remaining two internationals, at altitude, to take the series.

“The Lions have their structures in place, they are building impressively and they are looking good. The Boks will be underdone and some of the chaps have been out of rugby for a long time. The flip side is that the Lions will have to lift themselves from playing against weakened provincial teams to taking on the Boks.”

“Look, they do all the basics really well, but it was their defence and their physicality at the breakdown which surprised me.”

Muller said the Sharks had spent a week practising how to beat the rush defence of the Lions.

“But nothing worked and I think we had only one line-break in the whole game. They were very organised.”

Their play at the breakdown showed a huge improvement from the Cheetahs game.

“If you leave any daylight between the ball-carrier and the players cleaning out, the Lions will win the turnover. They were very physical and well-drilled.”

But Muller said he has not changed his mind and believes that a “smart” Bok side playing to their potential will still win.

“We are good enough to beat them, but it will be exceptionally tough, a real dogfight out there.”