Sharks need to rein in the excitement levels

Keeping a lid on the excitement in the Sharks squad is just one of the challenges facing coach John Plumtree ahead of Saturday’s Currie Cup semi-final against the Lions at King’s Park. 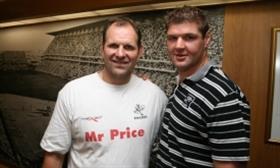 Keeping a lid on the excitement in the Sharks squad is just one of the challenges facing coach John Plumtree ahead of Saturday’s Currie Cup semi-final against the Lions at King’s Park.

Plumtree and Sharks captain Johann Muller faced the media in Durban yesterday and both emphasised the need to remain focused on the game rather than all the hype.

“This is why we are in the game,” said Muller, “to play in games like this, at our home ground in front of 40 000 spectators. “It is just important to keep the excitement levels down.”

“He’s feeling a lot better. There is not too much wrong with the shoulder structurally, just a bit of muscular damage. He will take part in non-contact training and we will make a decision on him later in the week.”

Plumtree said that Nikolai Blignaut would cover for Van den Berg off the bench if the Bok lock is forced to withdraw.

The Sharks coach said the players were preparing well and were excited ahead of Saturday’s challenge.

“But it is really important that they don’t play the game until Saturday. It is no use using all their energy in the build-up, so keeping them relaxed and focused is important.”

Plumtree said that after 18 weeks of Currie Cup action there was little to do in terms of preparation and to make them play better.

“We just have to make sure that by Saturday they are ready to explode.”

Responding to suggestions from the Lions camp that the Sharks have a tendency to freeze in in the knock-out stages of competitions, Plumtree said the players would try and do their talking on the field.

“We respect for Lions. They’re a tough side and we only beat them in the second half at Ellis Park last month. A couple of individual efforts secured the win and we know our performance wasn’t perfect. This week there is a lot of pressure and everyone raises their intensity.

Plumtree welcomed the appointment of Mark Lawrence as the referee.

“He’s been in good form, he knows us well, we’re more than happy with his appointment.”

Plumtree said that the Sharks wanted to play the game at speed, without collpased scrums and stoppages.

In contrast, said Plumtree, the Lions want to slow up the game and obviously the referee has an important role to play.

He dismissed talk of the Sharks being the favourites.

“In knock-out rugby there are no favourites. We have the advatnage ofplaying at home and we must make it work for us but, in the end, we must still do the job.”

The Durban semi-final kicks off early — at 2.30 pm — to allow for extra time to be played if necesary before the Loftus play-off between the Blue Bulls and Free State at 5pm.

The Currie Cup final will be on October 25 — a fortnight after the semi-finals — to allow the host province to prepare for the climax to the domestic season.