THE Black-and-White Friday campaign launched by the Sharks ahead of their Currie Cup Final game created a buzz in schools around Pietermaritzburg yesterday. ... 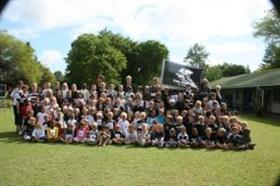 THE Black-and-White Friday campaign launched by the Sharks ahead of their Currie Cup Final game created a buzz in schools around Pietermaritzburg yesterday.

Simon Weaver, headmaster of Cordwalles Prep School said: “As a joke we said that boys who supported Western Province (WP) had to come to school in formal uniform. A few were brave enough to do so, but everyone else was in full Sharks regalia.”

Sala Schutte, marketing manager of Merchiston, said the whole school, pupils and staff had dressed up in black and white and practised Sharks war cries. “The atmosphere was very festive with lots of flags, hats and other Sharks memorabilia at schools yesterday. We are all one hundred percent behind the Sharks.”

Ashwin Ramgoolam, principal of Carter High, said pupils and staff at the school responded “in a phenomenal way” and all turned out in black and white. “We used it as a fundraising opportunity by ‘fining’ pupils R5 to come to school in civvies. It was also a great morale-building exercise and created a lot of excitement around the school.”

Two pupils at Carter braved the sea of black and white that engulfed the school yesterday to show their support for “their teams”. Wade Harris of grade 11 was kitted out in his WP colours because he was born in Cape Town and still supports that team, although the rest of his family are Sharks fans. Tenth-grader Chanelle van Vreden is not only a Blue Bulls supporter, but also the first qualified female rugby referee in the Pietermaritzburg Rugby Sub-Union. She has refereed high school and club games.

The principal of Athlone Primary, Anton Wepener, said: “It was a very festive day for pupils and staff and we look forward to the game.”

Staff at Cowan House dressed in black and white and Mark Emmerson, the headmaster, said: “By coincidence, a book presented to one of our pupils in assembly yesterday was called Shark Bait. The children agreed unanimously that that is what Western Province will be today. They are particularly rooting for Patrick Lambie, the Michaelhouse old boy and Sharks number 10, who came to speak to them recently.”