SELF-DESCRIBED “roundish women of a certain age”, Marilynn and Sheila Brass, also known as the Brass Sisters, like to say they are home chefs with 114 years of baking experience between them. ... 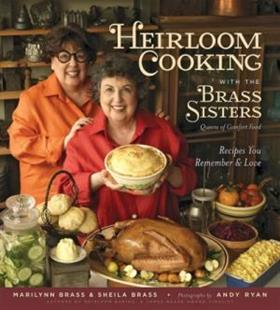 SELF-DESCRIBED “roundish women of a certain age”, Marilynn and Sheila Brass, also known as the Brass Sisters, like to say they are home chefs with 114 years of baking experience between them.

They are also inveterate collectors and discoverers of cookbooks, including the hand-crafted kind held together by pins and long ago shoved in a forgotten drawer.

About 10 years ago, the sisters began testing the recipes they trolled attics, flea markets and yard sales to find. Their cookbook, Heirloom Baking with the Brass Sisters, which gathers 150 of their favourites, is the result.

The sisters from Cambridge, Massachusetts spoke to Reuters about finishing each other’s sentences, testing recipes without a dishwasher and researching the meaning of “enough cinnamon to cover a tuppence”.

Why did you write this book?

We’re sort of forensic cookbook authors. We collect culinary antiques. We’ve collected 6 500 cookbooks, some dating back to 1600s, many from yard sales or attics, where there was often a box of cookbooks, or handwritten recipes held together with safety pins. We began to wonder what these recipes would taste like, so we started testing them.

What did you learn about the women behind these recipes?

They ranged from society women in Philadelphia, to maids and housekeepers. Women would annotate the recipes. Someone would write: “She worked as a maid.” But socialite and cook would have been forgotten if someone hadn’t done this book.

What were the challenges in re-creating such old recipes?

It was mostly the archaic language. When they said “rinse the butter”, that was the way they used to churn butter and preserve it with salt. Some recipes we made 10 times. We had to find out how much a gill was, four ounces (118 ml), or what people meant when they said “a suspicion of ginger” or “enough cinnamon to cover a tuppence”.

We went online and to our own research library. But the biggest challenge was the word “cup”. A cup of flour, we thought, was a cup of flour, but was it a coffee cup or a tea cup? Often people meant their own tea cup, that they passed on down the family. So we had to keep trying and figuring it out.

How did you learn to cook and bake?

Our mother was a fabulous, self-taught cook and baker. As soon as our noses reached the level of the kitchen table, she would take us into the kitchen and show us how. We had our own child-sized tools, and if she made a blueberry pie, we’d make turnovers with the extra dough. She gave us that heritage, that when you entered the kitchen, that’s where you were most creative.

How do you two divide the labour?

We both bake and cook. When we go into the kitchen, we don’t care who does what. We have fun. We tested all our recipes without a dishwasher. No one tested for us. We now have a dishwasher and we’re thrilled.

Do you have any advice for aspiring bakers?

We encourage people to do a gentle interrogation of the elders at gatherings to get those stories and get those recipes. — Reuters.

Preheat the oven to 180 degrees Celsius. Cut a wax paper liner to fit the bottom of a 23 cm cake pan. Coat the pan with vegetable spray, insert the liner and spray again to coat the liner.

Sift together flour, sugar and baking powder into the bowl of a mixer fitted with the paddle attachment. Add milk gradually, beating to combine. Add eggs, one at a time, and shortening. Fold in raisins and currants.

Mix batter twice with folding motion before turning out into pan. Brush top of loaf with melted butter. Bake 55 to 60 minutes or until top of loaf is golden brown and a tester comes out clean. Cool in pan on rack.