ADELAIDE — A belligerent Australia ended a rare display of defiance by England’s middle order batsmen to push to the brink of victory in the second Ashes Test ... 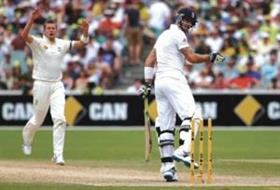 ADELAIDE — A belligerent Australia ended a rare display of defiance by England’s middle order batsmen to push to the brink of victory in the second Ashes Test in Adelaide at the close of day four yesterday.

Staring down the barrel of a second straight defeat, Joe Root struck a defiant half-century to raise a glimmer of hope for England, but his dismissal for 87 snuffed it out quickly and the tourists were 247-6 at the close, needing a further 284 runs to win or to bat through today to save the Test.

Following Root’s dismissal, Test debutant Ben Stokes followed for 28, leaving wicketkeeper Matt Prior (31 not out) and Stuart Broad (22 not out) with the task of an improbable rescue mission on a fifth day wicket.

Some rain and a possible storm is expected today, but a similar forecast for yesterday failed to stop a minute of play as England dug in grimly against their opponents, who grew increasingly aggressive in their verbal exchanges as the day wore on.

“We were confident with the runs we got on the board,” Australia paceman Peter Siddle told reporters.

“We knew it was going to be tough. We toiled well all day. Six wickets down, and hopefully a few more early ones tomorrow.

“I think the big factor is going to be the new ball. It’s still only 10 overs old.”

Prior and Broad rode their luck in the final overs against the new ball, with edges soaring into the air only to land between fielders, frustrating an Australian team that had it far too easy in England’s first innings of 172.

England’s batsmen finally surpassed 200 in a single innings for the first time this series and much of the credit was due to the Root, who battled hard for nearly four-and-a-half hours.

Spinner Nathan Lyon eventually coaxed an edge from the 22-year-old Yorkshireman that deflected off his pad and popped up for wicketkeeper Brad Haddin to clinch his 200th catch in Tests.

The 22-year-old Yorkshireman was given a warm ovation as he trudged off and the fighting knock may settle the debate about the number three spot in Jonathan Trott’s absence.

“Certainly we had a scrap on,” Root told reporters. “We knew we had to front up today and try and put in a performance and show we were up for a fight.

“If there’s a bit of weather about I think we might be able to [avoid defeat]. I think we’re obviously up against it.”

Stokes also showed grit to remain for 90 balls for his 28, but the new ball proved too hot for the New Zealand-born all-rounder and he was out nicking a catch off seamer Ryan Harris straight to Australia captain Michael Clarke at second slip.

Australia had set England a victory target of 531 with a declaration before the start of play and the tourists chase began disastrously, with openers Alastair Cook and Michael Carberry losing their wickets cheaply to rash shots before the first drinks break.

Mitchell Johnson, who tore through England’s first innings with a spell of 7-40, struck with his third ball of the day to remove England captain Cook for one run.

Having beaten Cook for pace in the first innings with a searing delivery that crashed into his stumps, Johnson flung in a short ball that the England skipper hooked poorly, the top edge flying high to be caught at long leg by Harris.

Carberry, who scored a fighting 60 in the first innings, followed soon after when he pulled Siddle to almost the same position where Lyon took another excellent catch to dismiss the opener for 14.

Siddle then captured the breakthrough wicket of Kevin Pietersen (53) to end a stubborn 111-run partnership with Root, continuing his domination of the South Africa-born batsman.

Part-time spinner Steven Smith struck soon after to remove Ian Bell for six when he threw up a full toss to leave the tourists on 143-4 at tea.

Bell, who was a rock in England’s insipid first innings of 172, drove it to mid-on where Johnson took a sharp, low catch.

Chris Rogers c Prior b Anderson 2

David Warner not out 83

Steve Smith not out 23

Matt Prior not out 31

Stuart Broad not out 22