THERE was calm and no obvious sign of panic yesterday at the Newlands West housing development, when squatters who have invaded the incomplete units since Wednesday, were served with notices of a Motion to Evict... 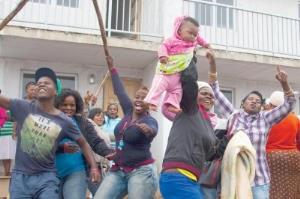 THERE was calm and no obvious sign of panic yesterday at the Newlands West housing development, when squatters who have invaded the incomplete units since Wednesday, were served with notices of a Motion to Evict.

The police kept a watchful eye as the deputy sheriff of the court handed out the notices, with most of the squatters even approaching him to collect the papers.

The application was back before the judge yesterday afternoon.

The squatters are all from the Polokwane Transit Camp about two kilometres away from the housing development.

The construction of this housing development, linked to Jay Singh, was halted just last week by court order.

Singh is the tender tycoon also linked to the collapsed Tongaat Mall, and who has netted more than R2 billion in city contracts in the last 10 years.

Singh, in a statement, laid the blame for the invasion clearly at the NHBRC and the continued “attacks” against the many businesses owned by his family and business associates.

Late on Wednesday evening Singh’s right-hand man Pravesh Inderjeeth, through their attorneys, applied for an order from the same high court to enforce the eviction of the squatters, believed to number 300 people.

KS Security manager Bongani Manzini said his four guards stationed at the site were “forced” to let through “at least 50 squatters for their own safety” at 2 am.

Ndumiso Dlamini (30) told The Witness earlier he knew they would be evicted, but said the invasion was in protest at the lack of delivery of low-cost housing by the municipality.

“We took this property because we know it belonged to Singh. We believe he acquired the premises illegally and that this land should be for the poor living in the transit camp,” said Dlamini.

There have been calls by the eThekwini political leadership to have Singh and companies linked to him blacklisted from any further council work.