IT started with a nervous twitch, but could blow up into a fully fledged music career as soon as her first single dedicated to Nelson Mandela hits the shelves.... 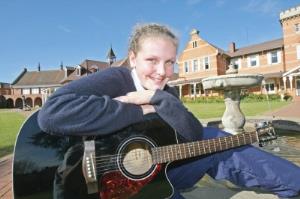 IT started with a nervous twitch, but could blow up into a fully fledged music career as soon as her first single dedicated to Nelson Mandela hits the shelves.

“I don’t know if I’ll pursue a career in music,” said Holly Wasserfall, the grade 8 pupil at St Anne’s Diocesan College whose song Siyabonga Mandela is not only taking South African airwaves by storm, but has also been approved by the 46664 Foundation, which says it epitomises the ideals behind the organisation.

“Music will always be there even if I don’t decide to go into it,” she added quickly. “It is my fairy tale. It’s my way out.”

Even though she might be a somewhat sceptical about going into the music industry, Holly admitted that hearing her voice on radio is always a trip. “I’ve only ever heard my voice while singing, and when you hear it on the radio it sounds different. You’re like, ‘is that me?’.”

The St Anne’s pupil has been wri­ting her own songs since the age of 10, but has only been recording songs for her first album over the past year. The first song she ever wrote was one about her grandfather’s death.

“It was a song about how much I missed him and stuff like that,” she said, while being photographed, and giggling at all the photographer’s jokes.

The 13-year-old is quite shy — so shy, in fact, that she even admitted that at assembly yesterday morning, she was shaking when the headmaster paid tribute to her in front of close to 400 other pupils. “It was scary,” she said.

However, she said that, as petrified of crowds as she may be, if the 46664 Foundation asked her to perform at its annual concert, she wouldn’t dare miss the opportunity. “I’ll train and do it,” she added.

Not only does she write songs, but Holly also plays the guitar.

“My uncle used to play a Spanish guitar when I was six and I loved it,” she said. “I developed a nervous twitch and so my mother made me learn an instrument that required more concentration. I’ve been playing ever since.”

Holly has even been offered a recor­ding deal after big time recording companies listened to her work, but she turned it down because of her studies.

“We decided to do this on our own,” she said. “By the July holidays we should be done with the whole album.”

However, if you cannot wait that long to hear what the budding musician has in store, then visit her website at www.holly.co.za to listen to her tribute to Mandela, the 46664-approved single.