CYCLING THE KZN provincial Road and Time Trial Championships were held in Durban and Westville last weekend and have been hailed by participants as probably the best provincial race in KZN yet. Saturday’s 8,5 km time-trial route measured up to world standards and allowed the competitors to push their ability in the race of truth ... 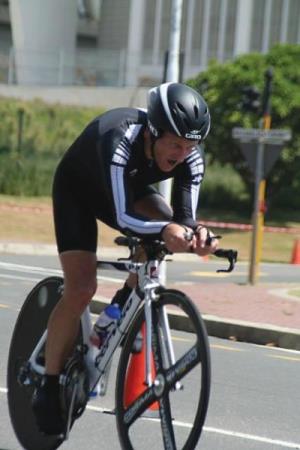 THE KZN provincial Road and Time Trial Championships were held in Durban and Westville last weekend and have been hailed by participants as probably the best provincial race in KZN yet. Saturday’s 8,5 km time-trial route measured up to world standards and allowed the competitors to push their ability in the race of truth. Pietermaritzburg’s veteran, Brett Berriman, defied the field with a superb ride and claimed the fastest time of the day. One of Cycling SA’s Olympic hopefuls, Cherise Taylor, averaged over 48 km per hour for the women’s race, taking an easy win in the Elite Women’s category.

Sunday’s Road Championships was a spectacular affair. With some of the country’s top mountain bikers taking part in the event, there were always going to be fireworks, and the participants did not disappoint the spectators. The course followed a 14 km circuit up and down both sides of the M13 freeway from Westville to 45th Cutting. The men and women’s events had a group start for juniors, U23, elite and vets, who were all competing for the overall KZN Championship trophy, as well as their respective category championship.

The men raced nine laps of the circuit and by the end of the first lap it was evident that there was some serious racing. Myles van Muschenbrook (Tasol), made an early attempt on the fourth lap to break away from the constant attacks and surges. By the fifth lap, Van Muschenbrook and Aston Davies had built up a one-and-a-half minute lead, with 56 kms to go. This lead soon evaporated and by the end of the sixth lap the bunch was together pushing over 400 watts per lap. On lap eight the big attack came with Burry Stander (Specialised) and Kevin Evans (360life) making a break. The attack was so severe that the bunch splintered and soon enough Stander and Evans had amassed a two-minute lead going into the last lap. Evans tried to shake Stander off his wheel in the final climb, knowing that the younger rider had a very powerful sprint, but Stander stuck with him over the crest and then attacked at that point. Evans stayed on Stander’s wheel and the two had a sprint finish over the last 200 metres. Stander took the win to be crowned KZN Champion with Evans taking the silver.

Some exciting racing was produced in the women’s race over eight laps with a constant battle of cat and mouse being played out. The surprise package was junior woman Heidi Dalton (Nashua) as she attacked with a lap to go and powered her way to an unassailable lead. Dalton put her head down and rode the last 14 kilometres in true time-trial fashion and took line honours as overall KZN women’s champion as well as clinching the junior women’s crown. Candice Neethling won the elite women’s category, followed by Danielle Dalton and Simone Karshagen.

For a full set of the results go to www.mr priceheroes.co.za

Next up on the KZN road cycling calendar is the Battery Centre Ryan Maullin Memorial Midmar Notts Cycle Race on February 19. For entries, go to www.roag.co.za or for inquiries contact Jill Edwardes at Burg Wheelers Cycling Club at 073 514 3436 (only after 2 pm).

The Subaru MTB Classic takes place tomorrow morning. The event starts from Cedara College (outside Pietermaritzburg) and promises some superb single track in the Hilton and Cedara forests, taking in several new sections specially developed for this race. The 41 km Subaru Classic is unashamedly biased towards single-track junkies, with approximately 17 km of the course made up of non-technical single track that includes well compacted existing tracks, extensions to existing tracks and new tracks, all designed to provide an unforgettable riding experience in the Cedara-Hilton plantations, one of the greatest mountain biking areas in KZN, if not the country. Total ascent over the first 33 km is approximately 1 000 metres — a fine challenge. For those looking for something tamer, there is the very doable 25 km intermediate race (starting at 8.30 am) and the 10 km kiddies’-novice race starting at 9.30 am. Late entries will be taken at registration between 6 am to 8 am, with the Classic starting at 8 am.

The aQuellé Mudman Series gets under way with the first event at Hermannsburg next Saturday. This multisport event is a chance for all triathletes to challenge themselves. Hermannsburg Mudman track is said to be the most picturesque and offers exquisite views of the school’s setting, taking you around the dam, bird hide and the plantation. The full-distance race is a 750-metre open-water swim or four-kilometre paddle, a 20 km cycle and a five-kilometre trail run. The half-distance race is a 375-metre open-water swim or two-kilometre paddle, a 10 km cycle and a 2,5 km trail run. There are lots of goody bags, T-shirts and medals for all entrants and finishers, as well as some great prizes to be won. There will be adequate marshalling, first aid, security and assistance along the route for all competitors. This is guaranteed to be one of the most entertaining multisport weekends in the Mudman series. Entries on www.roag.co.za