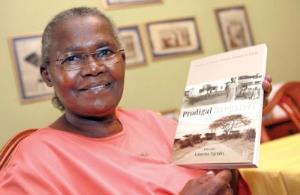 In 2000, I happened to drive with her from Port Elizabeth to the Grahamstown Festival where she was launching the South African edition of her book And They Didn’t Die. It was a memorable journey, one shortened by Ngcobo’s warm and engaging personality and the stories she told me about growing up in the Ixopo district where she was born in 1931.

Ngcobo’s father, Simon Gwina, died when she was eight and Ngcobo credited her mother Rosa with encouraging her to read, write and obtain a BA degree and a teaching qualification at the University of Fort Hare.

“My mother told me all about English history, Henry VIII and his six wives, all of that,” she recalled. “She told me all the Greek myths. I never learnt them from books but from her. She told me about Poseidon who had picked up this great rock, then stood on a cliff and thrown it down into the sea where it broke into pieces and those pieces became the Greek islands. When I went to Greece I went to the cliff from where Poseidon had thrown the rock and there were all the islands just like she had told us. I wrote her a long emotional letter after that.”

In hindsight it’s tempting to think that hearing such stories was a preparation for Ngcobo’s exile in the sixties when she was forced to flee South Africa along with her husband, Pan-Africanist Congress founding member A.B. Ngcobo, and their three children. The first years of exile were spent in Swaziland and Zambia — before moving to England — where she would stay for 25 years.

Living in London, Ngcobo taught English at several primary schools, at many serving as deputy principal. Her mother also came to visit. “When she came to London I took her to the Tower of London. She had to see that.”

Speaking to Ngcobo last week following the launch of her new book, Prodigal Daughters, she said England gave her the opportunity to develop her skills as a writer. There she wrote her first novel, Cross of Gold, set against the backdrop of Sharpeville in 1960, followed by And They Didn’t Die. She also wrote many academic papers and attended writers’ conferences in Europe and the United States.

While in England, Ngcobo also edited an anthology of black women’s writing, Let it be Told. Prodigal Daughters, subtitled Stories of South African Women in Exile, is another anthology. “It was not a book I planned to write,” said Ngcobo who edited and contributed to the collection. “When I first came back from exile in 1994 I was surprised by the attitude of people to exiles and refugees. People would invite you round for tea , but they just didn’t ask questions — not even family members and relatives were interested.

“Speaking to others I found they had had the same experience. Nobody seemed to care about the years you were away. It was as if that was yesterday and you came back today. It began to worry me. One day people will want to make sense of this time, of what happened, but they will only be able to do that if we tell our stories now because we will all be gone by the time people are interested.”

Ngcobo credits her friend and fellow exile Thokozile maZulu Chaane for providing the crucial impetus for the book just hours before she died. “I spent the whole day with her talking about books.” During this conversation the two women agreed that it was “not only important to recall our history in exile, but to capture it for posterity”.

Chaane’s funeral was a gathering of fellow exiles, all of whom echoed Ngcobo’s feelings. “And that’s how the idea of the book came.”

Ngcobo then set about persuading women to tell their stories of exile. “If it was to make sense it had to be by all of us. Our stories are the same but also very different. We had the same experiences, but we reacted differently. And it’s not just African women, but women of all races. We came to know each other in exile as members of the struggle.”

Their stories, as Ngcobo says, are similar in some respects, but each is unique. Most went into exile to avoid detention, prison and torture during the apartheid era, but exile was no safe haven. Several women write of the deprivation and danger they experienced in exile. Neither did they find a united front in opposition to apartheid. There was friction between political groups and between individuals. Both the ANC and the PAC were riven with internal fractures. The PAC infighting created a situation that saw Ngcobo’s husband lucky to escape with his life. Ngcobo’s account pulls few punches in detailing some of these episodes. “I know I will be attacked for some of the things I say, but I know these things happened. I lived through them.”

Several of the accounts feature the abuse — sexual and otherwise — that many women either experienced or witnessed at the hands of South African men in exile. “Black women have carried a thorn in their hearts for many years,” says Ngcobo, dating the pain back to the early 20th century when women were not allowed to be members of the ANC. “This was something men were building together. The ANC said ‘this is not for women’. Women were alright to entertain, to cook food or be beautiful to have around.”

One might have expected an advantage of exile to have been greater liberation for women freed from the constraints of a conservative South Africa. “My experience was that it was the opposite,” says Ngcobo. “At home I was used to sitting around talking books and politics with men. We discussed these things as equals. But in exile there was the sense they were against us, that it was below their dignity to discuss such things with us.”

Finding themselves cold-shouldered, Ngcobo and others set about forming a women’s organisation to support women in South Africa. “We began writing letters to other women’s groups all over the world, putting forward the case of the women we had left behind and trying to collect funds for their needs.” They received support and donations, mainly of clothes, from Sweden, England and the U.S., including from Robert Kennedy. A delegation sent to China yielded political and moral support.

Then a summons was received from PAC leader Potlako Leballo. “He asked for all our documents and the money we had collected, and confiscated it. ‘I want the money for the boys in the bush’, he told us. “That was the final break. ‘Now I’m in the struggle, but not with the men’, I thought.”

On her return to South Africa in 1994 (which also saw the publication of her book for children, Fikile learns to like other people) Ngcobo found a political home in the IFP as a member of the KwaZulu-Natal provincial legislature. “Buthelezi was a nationalist not a communist. He was a nationalist like [Albert] Luthuli. And the IFP respected my space as PAC.”

Ngcobo’s husband died in 1997. Nearly 10 years later, in 2006, Ngcobo was presented with a lifetime achievement award from the Department of Sport, Arts, Culture and Recreation and, in 2008, the Order of Ikhamanga from the presidency for excelling in the field of literature and for her work championing gender equality in South Africa.

Asked for her thoughts on South Africa at present, the sparkle in her eye dims. “South Africa is my home,” she says, “but I am very hurt about what is going on now. It has nothing to do with what we gave our lives over to. It is the sad part of a long journey. The ANC has failed the struggle. It has chosen the material rewards of struggle. It upsets me very much. We lived in such poverty for so many years. We wanted to free South Africa without any thought of reward. This is not what we fought for.”

• Prodigal Daughters — Stories of South African Women in Exile edited by Lauretta Ngcobo is published by the University of KwaZulu-Natal Press.