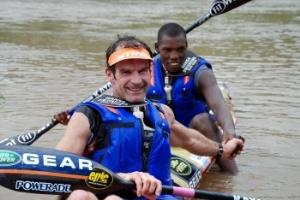 Stott and Thompson were initially disqualified after McGregor and Bruss pointed out that they had run along a banned portage, but this was overturned and converted to a R1 000 fine each, a move McGregor slammed as giving out the message that “some paddlers are bigger than the sport”.

E. coli level there. This made Braai Point portage compulsory, which was relayed to paddlers via SMS and e-mail on Wednesday afternoon.

“Ant was unaware of this, and so carried over at Pinetree. Once they realised the mistake, Ant and Wayne turned back and went to the correct portage. They stopped and waited for Hank and Sven to pass them, and then carried on and ended third,” De Vries said. He added that Stott and Thompson gained no advantage, which is why the jury granted their appeal.

Stott said after the finish yesterday he was “shocked” at what he called an “unsportsmanlike” move by McGregor and Bruss.

“All it has done is made us hungrier to get out there and prove a point. We are really frustrated that something like this has happened … that we had to spend so much time thinking about. It was a grey area to begin with and we got it slightly wrong, but it didn’t affect the race in any way.

“I can’t understand why they went through the hassle of lodging a complaint. I don’t understand what they personally gained from it. Now we are just focused on getting out there tomorrow morning and hopefully gain some time.

When The Witness phoned McGregor for comment, he was unaware that the disqualification had been overturned and said it was “pathetic” that it had been.

“The fact is that they set rules about where you can and can’t go, and who gives them [Stott and Thompson] the right to be bigger than the sport? I don’t think the money has anything to do with it. Their sponsor will just give them R1 000.”

When asked whether he thought Stott and Thompson gained an advantage, he said: “It makes no difference. It doesn’t change things just because they waited a bit and said sorry.

Does that mean that tomorrow I can go to the start with my chequebook, break the rules, say sorry and get away with it?”

McGregor claimed Stott was given “special treatment” because of “his relationship with [race chairman] Cameron McKenzie”.

Last year McGregor lost what had been a significant lead during day one when he took a wrong, but not illegal, portage at a similar point.

A source who preferred to remain anonymous said there is a “strong paddling community who are very upset”.

“This goes completely against the spirit of the Dusi. It was so uncalled for, and all it’s done is make people furious with the two of them. All eyes will be on Hank McGregor, and if he so much as puts a toe out of place, you can bet there will be a complaint lodged against him.”

In comparison, the women’s race went as predicted, with 2006 K2 winners Abbey Miedema and Alexa Lombard comfortably winning the first stage and local team Robyn Kime and Laura Thompson just over 10 minutes behind in second.